In which Leona discovers where she is and engages on a road trip!

The shack was not in or near Winterhold as I had already guessed. It was located in a swamp just south of Solitude, seat of the High King of Skryim. That’s on the other side of Skyrim from the inn where I’d fallen asleep.

I headed for Solitudesince Riften was quite a distance away now. I entered just in time to watch an execution. One of the local men had helped Ulfric escape after he’d killed the High King and so that local man was being executed. Emotions ran high, half the people thought he deserved to die, the other half didn’t. I didn’t stay long in such a charged atmosphere, long enough to sell my hides and meat. Then I immediately headed south and out of there.

I figured I would head for Whiterun since it’s on the way back and I hadn’t been there before. On the way I passed over the Dragon Bridge, which is an ancient bridge. It was kind of creepy, that’s for sure. There were more giant spiders and  a cow all done up with runes heading for a ruined temple of some kind. That was filled with frost trolls. Nasty buggers if they catch you unaware. 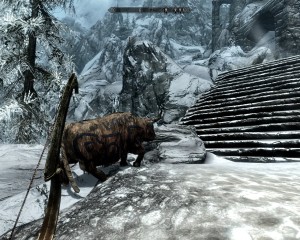 Whiterun was all abuzz with the word of Dragons. They claimed that a dragon had attacked the nearby city of Helgin and was often seen flying around the mountains. Now, no one I knew had actually seen this creature, but they were panicked enough that they almost didn’t let me in the city. They can’t have imagined I was a dragon.

I did manage to track down Khajaro’s bandits and finally retrieve his moonstone amulet. Then I had to track down the Kahjiit caravan. Luckily they were just outside Windhelm which got me back in familiar territory.

I checked the caves around where the skooma smuggles had been hiding out, just to make sure that they hadn’t set up shop again. Instead I found  nest of black mages and an ancient Nord sword. Queen Freydis ruled Windhelm long ago and having listened to Windhelm’s smith, Oengul, often enough – I wondered if it might be her blade. It was.

The Jarl was pleased with me for taking care of the skooma smugglers and decided on the spot to make me Thane! Me!? The honor is huge and I was honored to accept. I bought the old rundown Honeyside house and spent all my coin fixing it up and making it habitable.