My name is Martin Curious. I live in the town of Strangeville. Daddy says my mother is an alien and that’s why I don’t look much like Daddy. I used to think I would change when I grew up because Hannah is like me. But Daddy says that I will always look different. Aliens are people that don’t live here. They live in the stars and fly around. He said that Aunt Jenny married an alien and I am like my cousin Johnny. I want to meet Johnny someday. 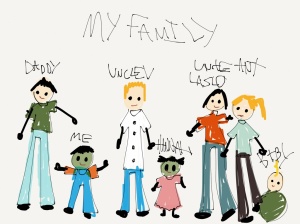 There are six people in my family but there will be seven soon. Auntie says she will have a baby soon. Uncle Lazlo won’t have a baby. The baby won’t be differnt like I am. In my family there is daddy and me. Daddy has a girlfriend and maybe she will come live with us. Daddy says it’s up to her. Hannah is Uncle V’s daughter and my sister. She doesn’t like to draw. I like to draw a lot. I hope Aunt []’s baby likes to draw too. Uncle Lazlo went on a trip to Takemizu and found Auntie. They got married there. Uncle V says he doesn’t have anyone he likes yet. 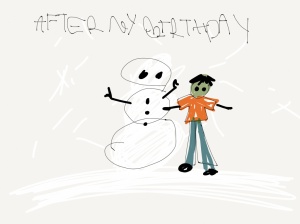 Today is my birthday. It is snowing for the first time. I can’t wait to play in the snow, but Uncle V says I have to have my birthday first. I want to make a snowman first. I don’t know if I want to go to school but Uncle V says I can draw in school so maybe it will be fun. Aunt Sarah says I’m getting a new bed. After my birthday I will be too big for the crib. She says I’ll get my own room too and won’t share with Daddy anymore. Daddy says he wants to share with his girlfriend now. I will miss my crib but the new baby will like it. 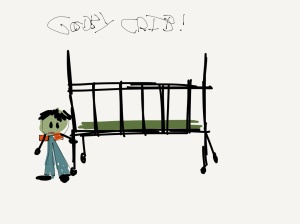 That is all. I will write again on my next birthday.