BHF6: A Visit by the Reaper

My first visit from Death was a quiet one. Pat passed away quietly, I was surprised it was Pat since before Shannon’s potion drinking, she was younger than the others by two days. But when it’s your time, it’s your time. 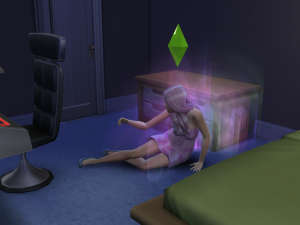 The Grim Reaper walked through the front down and down the hallway past where Elizabeth and Ashley were chatting to no avail. No one came to protest, beg, or mourn. I was surprised it was Pat since before Shannon’s potion drinking, she was younger than the others by two days (due to everyone else aging up while she was pregnant). But when it’s your time, it’s your time.

Afterwards however, Elizabeth wandered in and didn’t freak out about the Grim Reaper being there or about the giant URN on the floor where her mother had laid moments before, instead she chatted up Death. Flirted with him. Shared her best ideas and inventions. Sadly however, my brief hopes of courting death and maybe having a little 1/2 reaper baby were for naught as that isn’t possible. I don’t need him in my family, but it would have been a fun child to play with. Instead Elizabeth still hasn’t gotten around to thinking about dating. She’s as bad as I am.

Edward on the other hand has made great strides and last night invited his girlfriend x to join the house. Now that we have two empty slots they may even have a child soon. I’ll try to have a wedding first. So our new member is… Edward had to give up some of his aspiration points to buy her a ‘youth’ potion since she came to me 7 days before she had her elder birthday. Hopefully they don’t take too long to start working on grandkids.

I had my first death just in time to coincide with EA’s first big content release: ghosts. How perfect the timing. Pat appeared one night. Some of my sims didn’t seem to react at all and even the one who was “scared” didn’t run from the room like they did in Sims3. Since my ghost died of old age the only thing I’ve noticed about her is that her “ghost color” matches her mood – rather than matching the way she died. She was sad when she first appeared so Edward got to comforting her. Later than night she possessed both computers making them shake, but so far she hasn’t been too much of a problem to keep around.

I wonder if we can have cemeteries in Sims4 – we’d need a few more lots I think to make it worth it (right now houses seem so precious), but that might be fun to build.