Childe 2: Zzzjuice and 3am Studying

The days blur together, even now. A side-effect they say, of Zzzjuice. You can live on the stuff, avoid the hallucinations and exhaustion and never sleep. But not without consequences. I feel lazy when I do sleep. It was novel at first, closing my eyes and opening them hours later as if no time had passed. But I always awake in a panic. Heart-racing, feeling as if I should have been doing something, anything. Another side-effect? 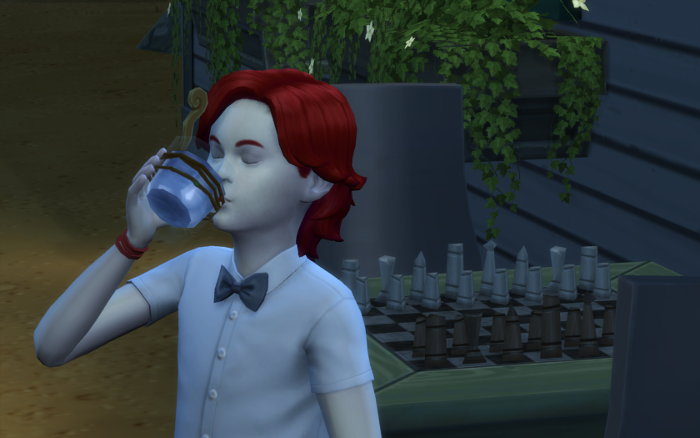 Eve asked me if I dreamed. I never have. When I sleep it’s as if I lose all consciousness, lose all self. It’s frightening. Better if I just stay awake, do something, anything. Sleeping may give my body respite, but my mind just can’t handle it.

Dad explained it all to me early on. The why. Why we wore these trackers, why I never slept. If I was to have a chance, I had to do as much as possible, study as hard as I could, learn everything. Others would be using Zzzjuice. I’d fall behind if I didn’t.

When I was a kid, it was a lot of fun, being awake when no one else was. Having the whole house (except the bedrooms upstairs) to myself. And I wanted for nothing. When I started learning chemistry, Mom and Dad bought the chemistry set. Same with the monkey bars and violin. It gets lonely at 3am. Between “night owl” and “morning sim” the hours stretch long. Sometime Dad would stay up with me since he worked later, but by 3am he had to call it a night and it was still hours before anyone else woke up.

I never resented Eve for her “normal” childhood. I don’t think she resented me for all my attention or if she did, she rarely showed it. One second was all that separated us. One second meant the difference between at 200 and at 57 on the CTS (childhood test of skills). As second-borne she wasn’t eligible. We’re near-twins. Conceived at the same time, born one-second apart, sharing the same parents, but not the same womb.

That was the other half of the experiment. The part Dad didn’t know when he signed the agreement. Not that he’s upset about Mom being an alien. It was just a surprise. You can tell they do love each other. Dad only panicked a little when he found out Mom was an alien. He could have backed out of the study. But he didn’t, even when it meant they both got pregnant.