So, what do you want me to do?

Introduce yourself, of course.

To…to the people who are “reading” this? Shouldn’t they know who I am if they’ve been reading the past six generations like you say?

Insane. It’s not just my opinion, it’s on your trait panel.

But, this is real.

Oh? As real as aliens?

Do you know a better reason for Darin’s weight gain?

He doesn’t work out, Dad does. He’s been getting bigger around the middle for years – it’s just…accelerated…

Uh-huh. Cuz aliens is crazy talk, whereas sudden weight gain is normal. Look, this just a different kind of reality. Um…Imagine you’re reading a book, but backwards because we’re the story.

Fine. Fine. Whatever. I’m Harley Pigglewiggle. My dad’s Meteor Pigglewiggle and my other dad is Darin. And this is my insane brother.

Hello! Michelangelo Pigglewiggle, at your service! 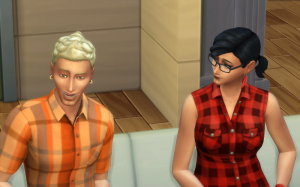 Um. They probably want to know what’s been going on since the last post.

That’s not too har−

A while ago, I know. Well she was playing this other game and then crammed in as much sims as she could over the weekend. So she’s making us do the hard work to catch everyone else up.

Okay. I don’t get it, but okay. … Um – Do you remember anything that happened soon after our birthday?

Not really… Maybe she took pictures.

Great, she’s a stalker as well. Well, let’s see them.

It was kind of uneventful, you know. We all just did our thing. Worked, studied, slept.

At least until Aunt Galaxy died. That was sad. She was painting out back by the pool.

Yeah, mom pleaded, but the Grim didn’t care. That was kind of cool. Mom on the other hand was a complete mope for days afterwards.

Is that why you had us move?

As heir, it’s important to help move the story. We’d been in that house for ages. It was old and stale and haunted.

Grandma Dylan is a cool ghost. And the rest have all disappeared. So it’s not that haunted.

Well, the new one is haunted too, but at least it feels different. Sometime I forget we’re on the same lot.

It does work better as a house. Better organized, even if it did lose us a point because it wasn’t worth as much.

It’s not done yet! Otherwise we wouldn’t be sharing a room. And I really need to figure out what to do with all the science equipment.

Mom did really perk up after we moved. She was quite cheerful at our birthday party yesterday.

I wondered why she was so cheerful?

She said she saw Aunt Galaxy’s ghost and was ready to join her.

Well it would have been better if she’d waited till she got that final promotion. CEO is great, but she could have gone even higher.

You could have pleaded with the Grim for her life. 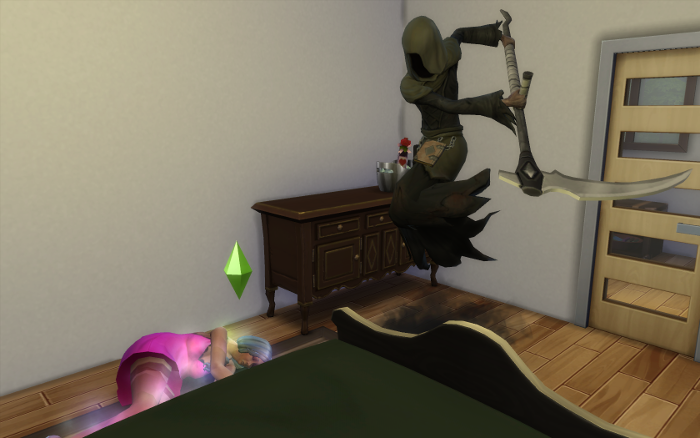 I was asleep. And anyway the Grim hates legacies and would never agree to spare her.