It goes by so fast. One moment they’re a tiny infant in a basket staring up at you with the biggest eyes in the universe, the next they running around getting ready for their first day of school. I didn’t expect it to all happen so fast.

We built her a little bedroom in the basement since she wasn’t going to sleep in my room any longer. (I won’t be missing the early morning wake up calls).

And Nova baked us desert while we had our first dinner together and got to know each other all over again.

Even though she’s only a child, she seems so mature for her age. She already knew everything about us that I would have thought to tell her. But we had a long talk about what she might expect from school. I don’t think there are other aliens her age yet. But she assured me it would be okay.

The next day I was surprised to see her leaving for school. She looked nothing like the daughter I’d sent to bed the night before. But it was Penelope so I just waved and told her to take care and study hard. She’s got to make these decisions for herself.

Then it was time I headed off to work, although I kept my cell phone close in case the school called me. I’d finally gotten a promotion to Laboratory Leader and there was a lot I knew I wanted to do. I strode in past my boss and down the hallway.

I turned right and entered my new lab. I was ready for a day of science.

After carefully analyzing some odd shaped rocks that I’d found out by the alien vents, I realized that half of the crystalline structure was a mirror image of the other. I checked with the plants I’d gathered as well and saw their cellular structure was similarly mirrored. Half the cells were backwards and yet they still worked the same way as their original counterparts. This was something big. I could tell. And I was eager to experiment more with these “reverse” structures. Heading back to the main lab, I chatted with my old friend A9 and together we whipped up a Reverser. At least that’s what I would call it. 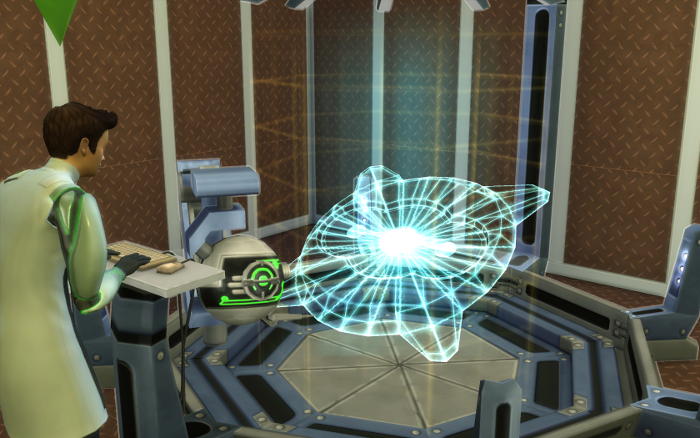 What does it do? Well I’m glad you asked. It reverses things, but leaves them perfectly functional. Impossible you might cry. If a cell were backwards it wouldn’t be able to function at all. And until today I would have agreed. But there’s something twisty about this alien technology. See it has reversed the structure of the beaker and the liquid inside. You can tell which is the copy easily under a microscope, but to the naked eye they appear identical. I’m not sure what this means for my theory of applied momentum, but I think it may be big.