There’s been a rash of evil sims in the Pigglewiggle Legacy. I’m sure you’ve noticed.

Meteor was the start, despite his mother’s innate “goodness” he turned “evil” in his teenage years. I really had no idea what to do with him, he completely flummoxed me. I’m a “good” person. I don’t even believe in evil (At least not in the traditional story-type evil), so figuring out how to understand, much less play an evil sim has been tough.

Meteor’s sisters, Nebula and Nova inherited their mom’s “good” trait which is why they got moved out and eventually (because I loved them) over to the Sidelines to get played fully. Nova has a lot of fun being a “good” cop, compassionate, but fair. Nebula is more family oriented, and a healer sim and thus is headed for the top of the doctor career. I’ve really got to find them partners.

Early on (during my insanity of 10 sims in one generation), Carman Pigglewiggle had aged up mean (another devastation as I absolutely loved her). That’s when I learned that mean and evil sims like others with those traits. (I suppose really all sims perfer sims with similar traits), but it was such a relief to know they wouldn’t deliberately destroy the relationship if the other sim was also mean or evil. So when Meteor needed a spouse, I didn’t mind if they had this less desirable trait if it meant he’d be happier.

Darin was a quiet sim, a writer, so he spent most of his time in front of his computer and didn’t get out to be “evil” very often. He did struggle with Meteor (not to keep the romance up, but their friendship never moved above the halfway point). They’d be having breakfast and one would suddenly yell at the other or mock them. But their whims were all to flirt and romance each other, so I figured they never meant it.

Meteor spend a lot of time working on his Renaissance aspiration (one that I’d not yet succeeded at and struggled with) and I never noticed him being evil with either of his kids. Both were “quiet” evils. 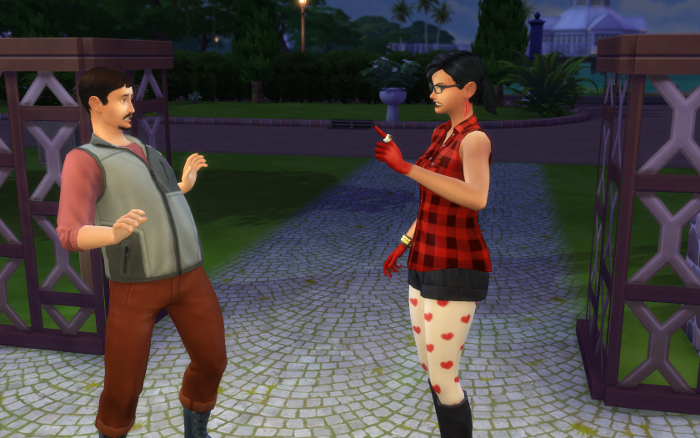 Harley did not surprise me by being evil. And I should have nipped it in the butt then by refusing to let her hang out with another evil sim. But she never really showed a preference for anyone except Deshawn. Unlike Meteor and Darin, Harley is social. She was in the criminal career which required mischievous and mean daily interactions. She maxed the mischief trait and aspiration.

But despite all that, she struggled to be really evil. She even had a voodoo doll to call over her sim-victim of choice. One day she invited him over and I queued up a bunch of interaction for her half mean and half mischief. When I returned, the two were chatting, feet in the pool, their relationship half repaired. When the Grim came to take Deshawn away, the first thing she whimed was to “apologize” to the Grim for sending all those spam texts. Deshawn I never knew very long, he was an old man when he moved into the Pigglewiggle mansion and I think he knew his time with Harley was short. He was NEVER mean to her and hardly talked to the rest of the family. (Maybe to avoid being mean to them?) I think he was just pleased to have a family finally (being a family-oriented sim). For all I know, he was a master criminal. But, if so, he hid it from me.

Mina was Darin’s only child (only because the game refuses to allow sims to adopt the children of their spouse. Which it should. Seeing Darin and Harley have the option to “romance” weirded me out). Darin was a changed sim with Mina. Again NEVER mean or evil with her. Supportive, encouraging, hugging! What was really amazing was that his relationship with Mina helped him recover his relationship with Meteor. Those two had never had been over 1/2 friendship, but when the time came for me to say goodbye, I noticed they’d autonomously repaired their relationship and were at full friendship. Mina…Mina is perhaps my favorite sim (in this save). She’s sooo pretty, but not a drop of Pigglewiggle in her. She also turned evil during her teenage years. I’m noticing she’s a bit mean from time to time since she’s a loner like her dad and not around the other kids very often. Mina’s sort of in the middle of two generations. I’m hoping to find someone (non-evil) for her so she can find the kind of happiness her father eventually found.

I’ve been lucky, I think. None of my sims have been evil in childhood so they all got to experience that innocence first. I don’t know what it would be like to have an evil child sim. Luthor was mean as a child. And I notice that he and Mina fight from time to time while eating dinner. I’m thinking aging up to evil is better than it being only trait. Mina could choose mixology and creative whims, but Luthor only had mean on the mind

Even so – and I was distracted for most of their childhood working them to death on two aspirations a piece – Luthor was social and friendly and great friends with Bane. Bane is of course evil although I’ve only played him for one night as an adult. He gets the benefit of this post first so if I’m really really lucky, I’ll be able to use his voice in the story.

If I were to do it all over, I would pay more attention to their traits and see how they would all work together to create a full personality. I’m usually too busy micromanaging my legacy to let them live fully – something I need to work on.

The Evil Sims of the Pigglewiggle Legacy