The Adventures of Two Blue Peas

“onezero, Peneleop. I’m please to announce we have arrived!” Cocoa said taking a deep breath. You could tell your home hard drive by the way it made your pixels tingle. It felt like home.

“That was fun,” onezero said with a huge smile. “Can we do it again?”

“Of course, you’ll have to use the gallery to get back home, right? But it’s late, we should head inside.” Cocoa led the way. The sidewalk and the hard drive felt right, but he felt a little like an intruder walking into his own home.

Cocoa agreed, but having traveled the gallery several times already he knew the feeling would pass. Friendships might have to be made again, but they were easier the second time. “Nova, Nebula!” he called out. “We’re home!”

“Oh!” Nova said rushing downstairs. “We weren’t sure when to expect you. I though you’d be here tomorrow.” She gave Penelope a big hug. “Welcome back. Your dad really missed you.”

“How was the spa?” Cocoa asked.

“Wonderful.” Nebula replied from the kitchen. “We’re both still in heaven from those massages.”

“My sister wants take up yoga, now.” Nova teased. Cocoa wasn’t surprised, Nebula was always wanting to work out or go for a run, he felt the same way. Maybe he should look up yoga.

“So you must be onezero.” Nova said as Nebula gave her niece a hug. “We’re glad you could come and visit. How was it? I’ve never travelled by gallery before, at least not between hard drives.” “It was very fun.” onezero paused to think of the best way to describe the experience. “Have you ever stepped into the silence in between the notes? That’s what it was like! Only it went on and on! But it wasn’t a dark silence. Oh, no. For all around was the thought of the next note about to be played. It was impending!”

Downstairs, Penelope was getting reacquainted with her stuffed unicorn.

“Acorna! You were right. Camp was so much fun. We had cupcakes everyday, and told stories, and played games… Yes. The other kids were very nice. There was another girl named Chiyo who told a story about a dragon. Only the dragon was not evil. And a boy named Finch who was an excellent violin player. He even performed as part of a trio … or was it a quintet? … for our last bonfire. And there was a boy named River. He was a bit of a trickster, but it was all in good fun.”

“Oh! And guess what, Acorna? There was another alien there. Her name is onezero and she’s come to visit for the rest of the summer, so be really nice to her. Don’t worry. I’m sure she’ll be your friend too.”

The girls were both exhausted after travelling all day and headed to bed early.

“Goodnight p2.” Penelope whispered as she crawled into bed.

But her friend was already fast asleep.

Cocoa, on the other hand, had difficulty falling asleep. He tried, but found himself awake again in the middle of the night. His stomach growled. Time for a midnight snack, he told himself and headed downstairs to the kitchen to see what was in the fridge. All his pixels were still buzzing after the last trip through the gallery. He wondered how gallery travel worked. Perhaps it had a connection to his studies on momentum. Like his momentum duplication machine. Could it be a variation in the vibration of pixels that caused the forward momentum through not only digital space, but actual space? He knew that via the gallery, a sim could end up anywhere at all. And what exciting sims he’d met.

The sims he’d met were very different and had completely different backgrounds. CathyTea and Joel, the camp’s counselors, had both been so friendly when he’d arrived to pick up Penelope. He’d barely gotten to know them, but he knew they were both good people. And as simselves they both  were able to tap into a wealth of knowledge that was beyond an ordinary sim. He’d promised they’d visit. Maybe for the holidays.

If he was going to be awake, Cocoa figured he might as well be useful. He headed back upstairs the computer. He wanted to get his ideas on gallery travel down before he forgot this feeling. When the birds stating singing, he was reminded that he’d need to take a nap at least or he’d be useless tomorrow. Or rather today.

The girls, having gone to bed early, were up soon after Cocoa finally fell asleep.

“What are you watching p2?” Penelope asked.

“A movie about Simfu. They move like they are dancing to music we cannot hear.”

Outside of the girl’s view, Nebula and Nova were eavesdropping as they ate breakfast. They smiled at each other. As Cocoa had said, those two were defiantly two peas in a pod.

“I think you might be right? With all that gallery travel, do you think he’s forgotten?”

“Maybe. We should do something for him anyway. I think normally he’d want a big party, but with the girls here that would be hard. They might feel left out if it was all adults that they didn’t know.”

“Leave it to me,” Nebula said getting up fro the table and headed over to where the girls were. “I bet the girls and I can figure something fun for us all to do to celebrate.”

“Morning Penelope and onezero.” Nebula said sitting down on the empty corner of the couch. “I’ve got a proposition for you both.”

“You might not know it, but today is your dad’s birthday, Penelope, and we wanted to do something special for him.”

“That’s a great idea. We can have a surprise party. We could make a cake and have ice cream.”

“But it can not be here, Aunt Nebula.” Penelope interrupted.

“Because then it wouldn’t be a surprise,” onezero said agreeing with Penelope.

“Father would see us preparing and that would spoil it.” Penelope explained. The three were silent for a moment as they tried to figure out how to host a party without letting Cocoa know about it.

“We could have it at the park!” Penelope said.

“We could get him to take us to the park this afternoon to play. Then he wouldn’t expect it. What do you think, onezero?” Penelope asked. She was excited about the idea of having a party for her father. He was always doing things for her, taking her to the library, taking her to camp, that she wanted to thank him properly.

“There’s so much air there!” onezero grinned at Penelope in complete agreement of the plan.

“Good morning, onezero,” Cocoa said sitting down at the kitchen table. “Did you sleep well?”

“I do! It’s very relaxing if a bit overplayed. But I wish they had sung to me last night. Might have helped me sleep.”

“You know the words right?”

“Oh, that was wonderful, onezero. You have a very good singing voice.” Cocoa said. onezero smiled at the compliment. “So what do you want to do today? It’s Saturday so I don’t work.”

“The park!” onezero said with a big smile. 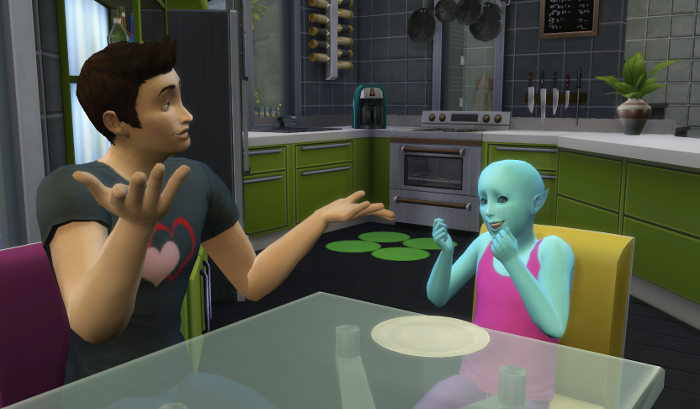