Through the Looking Glass

He and A9 had crunched the numbers and found the correct frequency for the molecular vibrations. Now it was just a matter of tweaking the settings to allow matter and most importantly living matter through the portal. The tests came back positive for a breathable atmosphere on the other side. 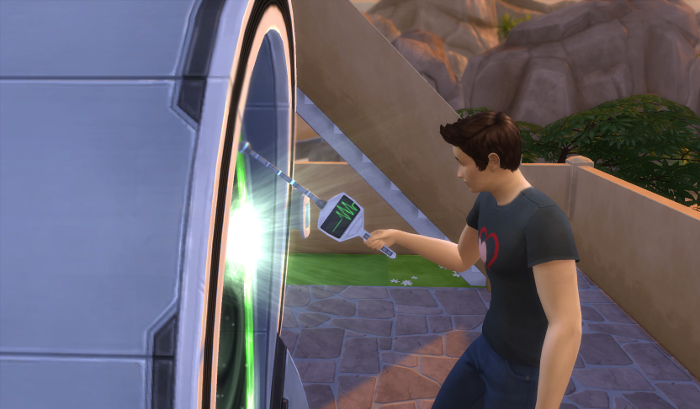 Finally it was time to test the portal for real. He imputed the molecular frequency and applied the stored momentum. Then with a deep breath, he entered. 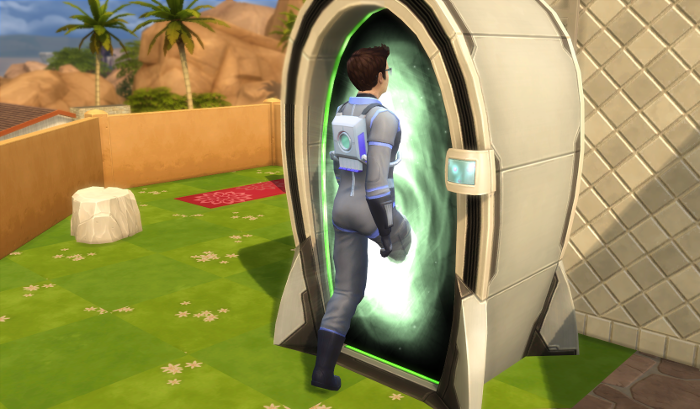 The light tickled, like being shocked all over at a very low voltage. Not painful. The journey didn’t take long, and when he landed on the other side….wow. Perfect. The girls were going to be so excited. “So, you’re going camping this weekend?” Nova asked once the song was over. The three sat down on the couch.

“Yes.” Penelope replied. “Father said he would take us. Um, are you not coming?”

“Oh, ha!” Nova said with a laugh and shook her head. “The two of us went camping once. Back when we were little kids. You had your birthday there, didn’t you, Nebula?” “I was miserable,” Nebula said. “It wasn’t my favorite birthday, let me tell you. We went camping. Camping, with a tent and everything. And outdoor bathrooms. Yuck. Those places reeked. And the bugs!” She shuddered at the memory. “We should have gotten a cabin.”

“But you two will have fun, I’m sure.” Nova quickly reassured Penelope. “The trees are actually quite lovely.”

“Oh, yes, it’ll be a blast I’m sure.” Nebula agreed. “Where’s onezero?” she asked looking around. “I thought she was getting a snack.”

onezero swam in the darkness. But the moonlight made the water glow. The water was soft against her skin, slipping past her finger faster than she could move them. “Hello little molecules,” she said softly. “Is it true you like blue things better?” As she swam, she listened to the buzz of her 1,000 mommies. “Something is happening,” she thought. “My mommies are excited. And the water molecules are tickling my toes.”

She got out went to find Penelope. Her friend was downstairs getting ready for bed.

“Yes, p2. There is something in the night air. I think it is because we are starting on our adventure.”

“I was looking ahead and behind, and I just know we’ll be camping somewhere where purple is refracted.” The next morning Cocoa found Penelope and onezero watching TV.

“Yes, we’re wearing our suits.” onezero said with a quick laugh. “It is extra buzzy this morning.”

“Oh, is that why you’re both dressed that way?” he asked. He had been going to ask them. He’d seen onezero wear her suit and Penelope would sometimes too, normally at night. But this was the first time he’d seen them both dressed the same.

“Have you eaten breakfast?” They nodded. “Well then you two, let’s go!” He said with a smile and stood up. He led them to the stairs going up.

“The roof? I thought we traveled by car to Granite Falls,” Penelope asked as they climbed the steps.

“Wow, what is this?” Penelope asked as they arrived on the roof. The two girls inspected the portal while Cocoa changed into his own suit. 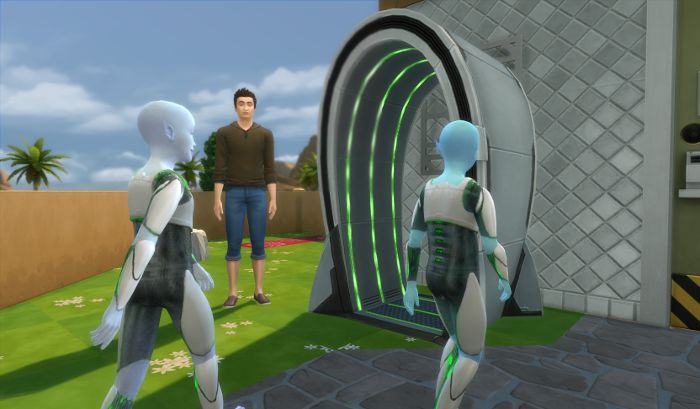 “It has a fuzzy-spiny feeling.” onezero announced.

“Yes. But the spininess is motion. The fuzziness is surrounding the spinning ones and keeping them safe.”

“I’ve done a bit of research and this frequency will take us to Sixam. I’m pretty sure that’s where your mothers are from.” Cocoa led the way. The girls followed…

…into a new world.

“Wonderful things,” onezero breathed as they arrived on Sixam.

“Oh p2! This is it! This is why the mommies were buzzing.” Penelope announced as the two of them waited for Cocoa to find a good spot to pitch their tent.

“Yes. They’re very close by. I can feel them everywhere around us. Like purple molecules of buzziness.”

“Penelope?” Cocoa called as he struggled to assemble the tent. “Can you give me a hand?”

onezero sat down on a rock nearby. It was smooth and cool. Tiny rock molecules raced around her feet as she kicked at the dirt. 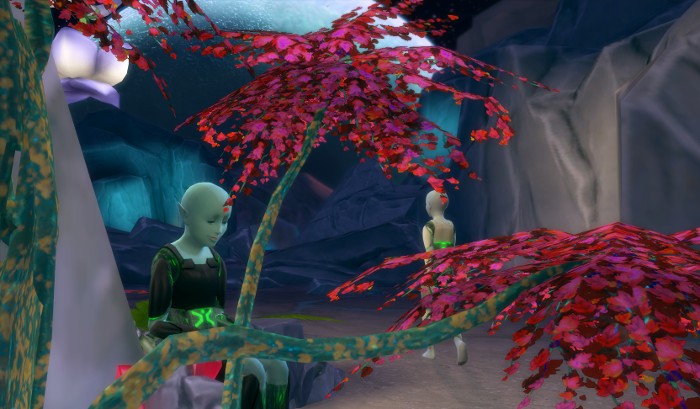 She looked around. Sixam was a very different land than she was used to in Oasis Springs. The sky was deep violet, the trees fuchsia and magenta. Even the rocks seemed to have a hint of lilac. Purple was refracted here. 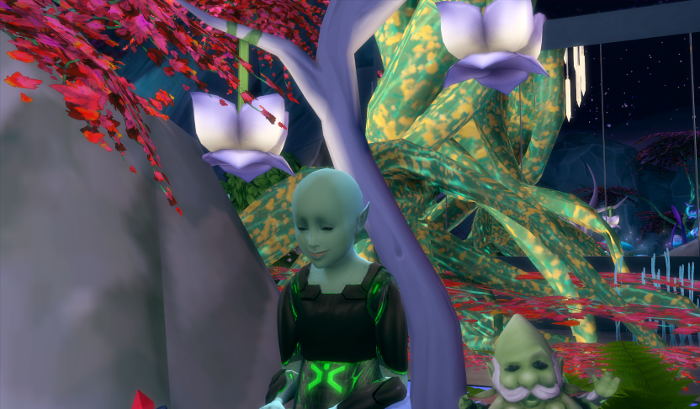 Looking ahead into the violet tomorrow, she smiled. She could tell that the mommies wanted them here for a reason. Now that she was nearby the buzz was softer, but clearer. She didn’t need to struggle to hear their words over everyday life. The words of the rock molecules and the tree molecules echoed what the mommies said instead of saying their own thing like they did at home. Everything here sung in harmony together. onezero hummed her own melody to the song they were singing. 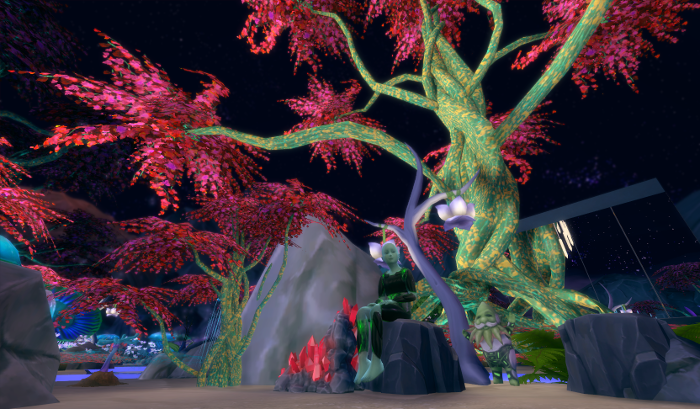 It was comfortable here. The light was not harsh, the air moist and heavy with half-remembered scents. Scents she knew from the future and the past, but had never smelled before. It was a spicy scent, kind of like cinnamon. Her stomach growled and she laughed. She headed to the camp site to see what food there was to eat. 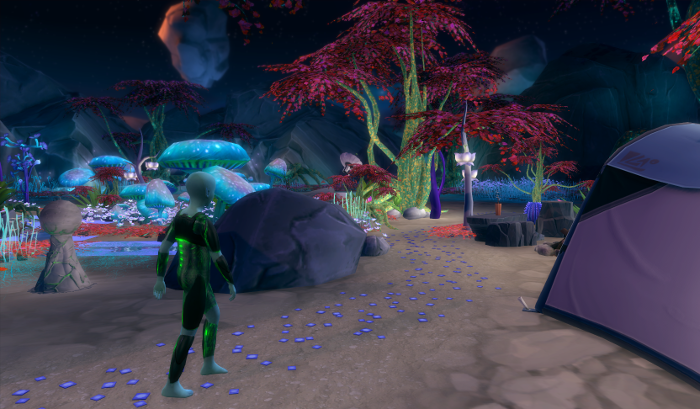