Is YNAB a game? Well, no. But I did originally by it on Steam so it’s like a game? Is it a budgeting game? Well, actually it’s one of the best examples I have of good gamification. (Shudder, that word is way overused.) By gamification, I don’t mean turning a serious thing – like finances – into a game by adding robots or points, but actually creating an interface that makes you want to do certain things. In this case it makes you want to manage your money – honestly – it’s fun to budget with this.

So what is YNAB?

This is the opposite of Mint. Mint tells you where your money went and then you categorize it. If you want to know what you’re spending your money on then Mint it great. If you actually want to budget the money you have and therefore spend it responsibly, I recommend YNAB. (You Need A Budget)

The goal is for that green number to always be 0. If it’s under you’re in trouble because you don’t have enough money. If it’s over 0 you’ve got money that needs categorizing.

Next you make the buckets to put your money in. That’s the whole idea of YNAB. You put all your money into buckets first and then as you spend money on certain things, you take that money only from that category.

For this example, I simplified their default categories into three items: Bills, Fun Stuff, Savings. (Yes you “spend money into savings!”) You got your Rent and Internet, your Food and Games, and your Gifts and Travel. Basically the “game” is to put all your money in these categories until you reach 0.

You’ll notice the 100.00 is now 30.00 as I’ve “spent” money into several categories. Once you’re at 0. You’re ready to start spending money. Every time you buy something, you say which budget item you took it from.

So here I got my amazingly low 5 dollar Comcast bill for my internet (perhaps I’m only paying part). I label that money “internet” and it gets pulled out of the internet bucket. My green number stays 0. but the internet budget, which had 5 dollars in it, now has 0. 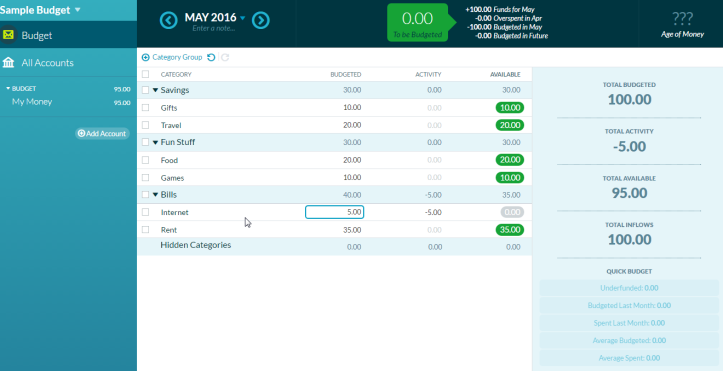 When you get more money in, then your budget number goes up. And you have to get the number back to 0. 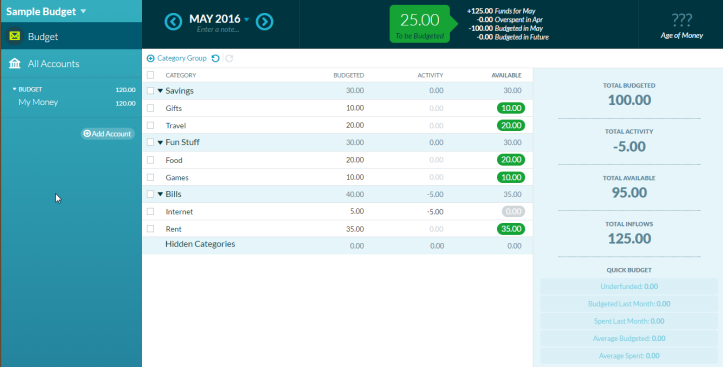 I’ve been using YNAB (on and off) for over four years now and I couldn’t be happier. I feel like I know what I’m doing with my money and when a big bill comes in, I don’t panic to pay it because I’ve already saved that money – I just added a little bit with every paycheck.

Since January I’ve been putting money towards my upcoming move. Which I knew would be expensive and while I’ll get a lot of my previous deposit back – that won’t be until after I complete my move so I can’t use that money to pay for my move. I needed to save money for the initial deposit, renting boxes, and the price of movers. Every month I added a more money into that category – but when a moving expense came through I took it out of that category.

Since my move is over, I took remaining balance out of there and added it to my Dining Out category (I found myself eating out a lot more when I packed all my dishes and food). I then hid the category because I don’t need to use it any more.

The main reason I like YNAB is that I can “spend” money into savings. I found that I didn’t value money that was just sitting around and tended to spend. So now I have lots of ‘savings’ category. My moving category was one, I also have Travel, Gifts, Charity, Emergency, Medical, and Car categories in my savings. This are big ticket items.

Some people who are better at hording money like it for other reasons, like they get to “spend” a tiny bit of money on themselves from time to time since they know all their money has a purpose.

I have categories for those yearly expenses – my auto insurance used to hit me hard every six months since I paid it all at once rather than monthly. Now I pay it “monthly” into my category and then pay it to the company all at once for the extra discount..

I also love that new YNAB will sync with my bank. Previously I had to input everything into the system by hand. Which was great, when I remembered to do it. And cause me to forgot to use YNAB for months at a time. Now I just click the sync button every week and and categorize my expenses. If I was running close to my budget I would want to do it more often.

In addition to the “make it 0” game, there’s a new one they added recently called “Age of Money.” Basically it tells you how long money sits in your account (from the time you put it in, till you pull it out.) The older your money the more you’re not living paycheck to paycheck.

Back when I started on YNAB I was living paycheck to paycheck and every time money came in I rushed to add it so that bills due that month would be paid. Right now, my money is 61 days old. (That’s two months!).

The final game I call “wack a mole.” You aren’t locked into your budget plans. You can move money from one category to another. Early on I had to do this a lot since I had no idea what a good number for my “house stuff” budget would be.

Now I have a better idea, but things crop up – say a new sims expansion – and I might need to move money around. I take money from Dining out and then put it into Games and Books. It means I will go out to eat less this month, but I have the latest game. As long as my 0 number doesn’t go negative, it’s all money I have so I can spend it where I will.

YNAB isn’t for everyone as much as I want it to be. First off there’s the price. You can try it out for 34 days free and I recommend you do – it can’t hurt to see if it works with your life. Previously versions of YNAB were a one-time fee of 60 bucks. Now they’ve moved (like everyone else) to a yearly subscription model. That pricing model won’t work for everyone.

It’s also an online program now instead of a desktop which comes with its own limitations especially if you have limited internet access. Also this online version of YNAB is still relatively new (it came out over Christmas) and so they’re still working to give it all the feature the previous version had. (I miss the graphs).

There was a strong – almost fanatically – YNAB following on their forums. A lot of them don’t like the new YNAB or struggled with it early on. The previous version worked well for them and I don’t think the community is as strong around the new app. I like it, but I didn’t really have any problems transferring over.