The dawn sun breaks over the trees and find the Huffman house just beginning to stir.

After his early morning run, Sam tends the plants in the garden. He’s normally up before everyone else and today is no exception. There are a lot of plants that need tending though. Sometimes he hires a gardener to help out. He doesn’t want them suffering because he didn’t know what he was doing. They seemed to be doing well despite his lack of skill.

Soon though, he heard the twins waking up and knew it was time to head back inside to head off the chaos that seemed to follow them where ever they went. Especially today since today was the first day they were going to school. With Karen leaving for work at the same time, it was his job to keep the house from blowing up.

“Evelyn, Elisa, are you hungry?” Sam asked as he found his family right where he expected in the kitchen. Karen had already poured herself a large coffee. The girls needed no such pick me up. He tossed his jacket on the sofa and joined them giving Karen a kiss on her cheek. 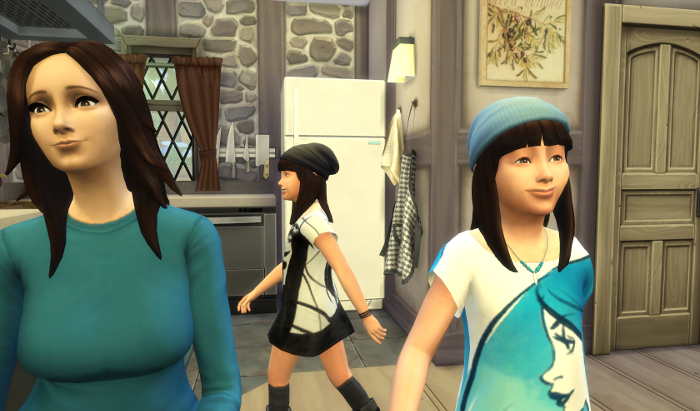 “Go get dressed, I’ll feed them,” he said. Karen nodded and took her coffee with her back into the bedroom. He turned to the twins. “What do you want for breakfast.

Sam nodded. “That I can do!” He got to work and before too long there was scrambled eggs, toast and bacon for all. Sam was glad his cooking had improved over the years. He remembered his first cooking attempt back in Granite Falls. If his mom hand’t been there to assist, it would have been a disaster, but now his food was pretty good.

“So,” Sam said as Elisa sat down. “You ready for school today?” “You know,” Sam said leaning close to his daughter. “I met your mom in elementary school. Maybe you’ll meet someone too.”

“I wasn’t thinking of boyfriends, but best friends.”

“Elisa has me as her best friend,” Evelyn said shoveling eggs into her mouth. “We’re like the dynamic duo – Batman and Robin.”

“But which one of you is batman and robin?”

“That should be obvious. I’m batman because I’m wearing black. Elisa is Robin because she’s dressed like a robin egg.”

“Well, I bet you’ll both make more friends at school. I know your Aunt Izzy was my best friend at home, but at school I had lots of best friends.”

The Huffmans finished eating and cleaned up the table. It was getting close to the time for everyone to leave. Sam didn’t work until the afternoon so he supervised the chaos of getting backpacks and briefcases ready with lunches, and secreted noted.

And then it was time.

The house was empty without the girls.