I was lost in the darkness.

I ran as fast and far as I could away from that girl. I kept hearing footsteps behind me long after the shouting had faded into the darkness. I didn’t dare look behind me. When I finally stopped I could hear nothing. I could feel nothing.

At first I felt only relief that I’d lost her. Then I realized I’d lost myself. Darkness rolled around me and stretched past the horizons. I couldn’t feel the tether to my door. 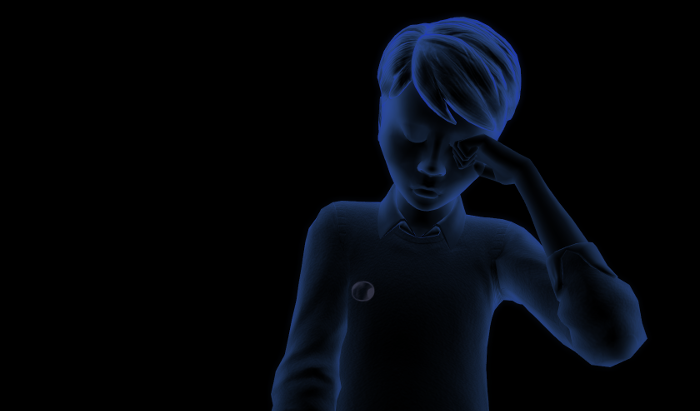 I kept turning slowly in place trying to feel a pull. It was hopeless. I had no idea which way to walk. I wanted to cry, but the darkness numbed my tears. I sat there, wishing I could cry. Wishing I could feel. For hours. For days? There’s no time in the darkness, a moment could be a second or it could be a year.

Then, the world around me shifted. A stilling in the darkness. A cold settled around me. I looked up. The darkness was filling with shadows around me.

The smoke solidified into bushes, trees, flowers. They were dull and colorless. In the middle  of the dark light, He sat. Should I bother him? Could I? I hesitated. But I was drawn to him, pulled towards him as I had been towards my door, only stronger. I couldn’t resist.

At last I stood before him. He was cloaked in shadows and smoke. “Are you the Grim Reaper?” He put down the the page he was reading and turned to face me. I couldn’t see a face in his hood. But I knew he was watching me.

I had his full attention. I swallowed. When he finally spoke his voice was like the darkness around me; it swallowed all sounds.

This was what I had wanted, right? This was why I’d come to the darkness. I had to ask. “I’m a ghost, aren’t I? O-of James?” I held my breath waiting for his response.

I was James!? But why didn’t remember being James? And more importantly – “What am supposed to do? Why am I here?” The questions escaped me before I could stop them.

His words fell like stones around me. For a second I couldn’t even understand them. And then the truth sunk it. He couldn’t help me. If he couldn’t help me….no one could. I was stuck here, I realized. Forever. Stuck as a ghost. I’d come here to find answers, braved that crazy ghost girl and now I was no better off now that I had been before.

Actually, I was worse off because I’d lost my door. I broke through the numbing darkness with my despair. Now, the tears finally came. 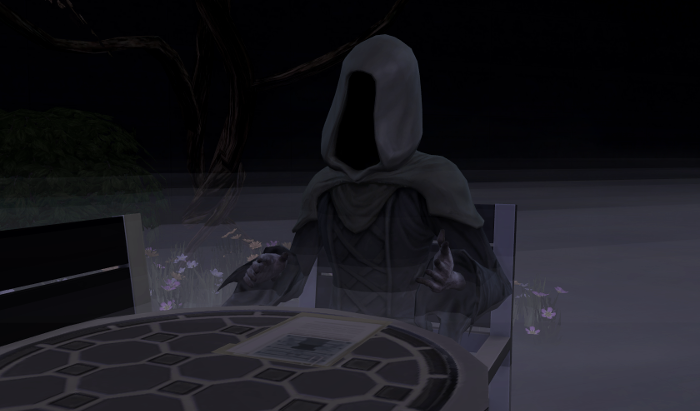 It wasn’t a question, but I nodded. I rubbed my eyes and tried to stop the flood. But it seemed that now that they had started, my tears refused to stop.

I looked up surprised, my tears stopping as quickly they had started. But he said he couldn’t help? He was pointing off between a break in the smoke covered dark bushes. I looked, but saw nothing beyond the smoke but darkness.

He nodded and picked up the page he had been reading.

“Um, thanks.” I said and headed toward the break in the bushes. I looked back and saw he was watching me again. I hesitated. What now?

He said, almost as an afterthought and then returned to his page as if he hadn’t spoken. I frowned? His book? It stirred a memory. Hadn’t he said something like that before the first time we met? Something about my life not being written?

As I stood there, the the whole place seemed to shift again. The scene before me started to run and blur into the darkness. I hurried towards where he pointed eager to get there before it dissipated. And then it was all gone and I was alone in the darkness again. Darkness stretching endlessly towards the horizons.

But – just as I was about to panic – I realized I could feel the pull of my door again. It was strong. Much strong than I remembered. I ran towards it.

Skidding to a halt in front of it, happiness burst inside me. Overwhelming me. There stood my door. It looked the same as always, tall and comforting. I turned the knob. My room was just as I’d left it. I squinted. Was it a little smaller?

No matter, I couldn’t wait to see Julia and, feeling the stillness of the house, I knew it was night. The house was dark and quiet. But Julia was here, I could hear her quiet breathing nearby. I was home.