So here instead of saving the world, you build up your plague and try to wipe out the human race. I’ve not played it as much as Pandemic so I only have bacteria available – but I know you can unlock additional traits and different types of diseases (like virus, parasite, bio-weapon) later on.

To start I picked my lovely bacteria and name it “Usability” – I work in User Experience, I’d love Usability to take over the world. You start with a map of the world and have to pick where to start your lovely creature of death.

My last disease (Cramps) started in Egypt and failed. So I decided to start in a similar, but more populous region. India. 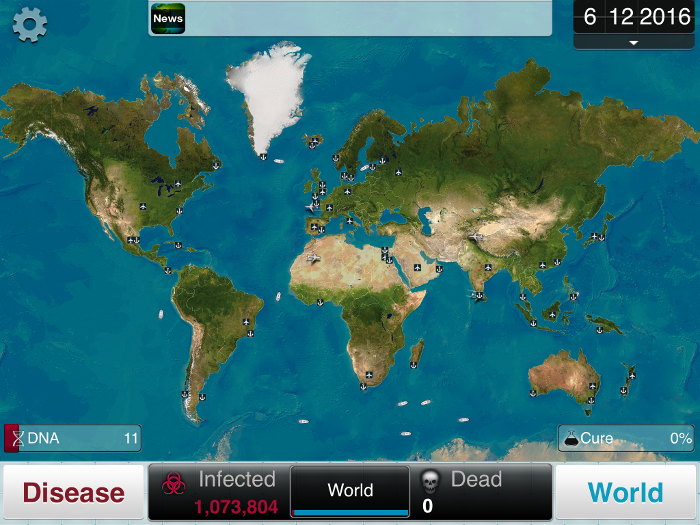 I’ve infected 1,073,804 people, barely anyone at all and I’ve killed no one. (This non-lethality is my strategy). You can see some red dots over India. Those are my infected folks.

And then Usability finally begins to spread (in 2017 – I forget what year you start).

I’ve infected a LOT more people, India is almost completely red and you can see the trails of red where infected ships have traveled. No one is worried yet (they should be) so the Cure for Usability is still at 0%. I’ve got 39 DNA points.

These DNA points are gotten when you tap on the red “infected” icon shown in the last image and also just over time as more folks are infected. These points are used to evolve your disease. Looks like I failed to take pictures of that.

For bacteria (and maybe all diseases) you have three types of upgrades: Transmission, Symptoms, and Abilities. My strategy is to increase the transmission as much as I should before upping the symptoms to cause death and saving the abilities (like being resistant to drugs) for once they start trying to cure me.

The nice thing about India is that I got China infected really really fast. I’ve started killing as well so they’ve started on the cure. But it’s a half-hearted start as best. (I am playing on normal – there are three levels of difficulty.).

I concentrated on ship and water transmission for this game. My last game was successful except I never infected Greenland so there were survivors – cold miserable post-apocalyptic survivors – but they survived.

So I knew I didn’t want to up my lethality until Greenland was infected this time. The anchor and plane icons on the map show ports and airports – as your disease progresses countries close their ports. You don’t want Greenland to close its port until Greenland is infected since it’s only got one port.

Usability infected Greenland by December of 2017.

As you can see not only have I infected almost the entire world but I’m killing like mad. The cure is only at 48%. By now, the humans are doomed. There aren’t enough left to actually find a cure. During this time you also need to tab on the “cure” popups to stop their research – but I mainly relied on mutations. There’s quite a few that make curing the disease more difficult.

The symptom of insanity causes infected people to be less likely to seek out help. And then you can add some resistance to drugs or even mutate a completely second strain. This late in the game you’re not getting DNA as much so hopefully you’ve saved some to use. 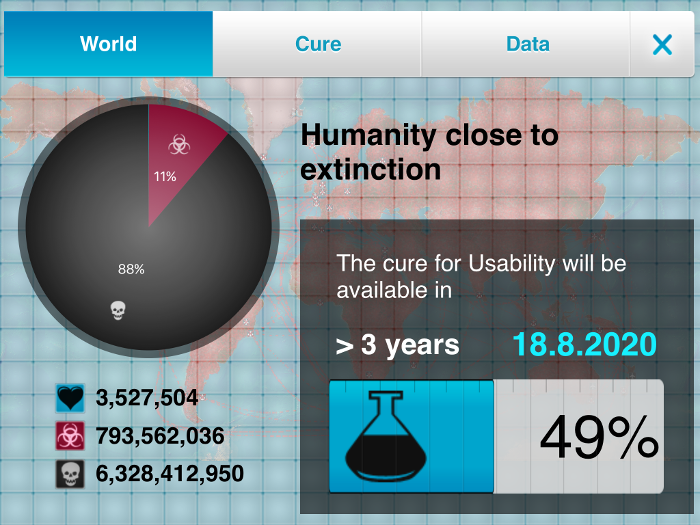 Look, a mere 3 million folks are still healthy! Humanity is doomed (and really mostly dead). I think the strategy works well for bacteria and maybe viruses – but bio-weapons? What would that be like?!

I just have to wait for them to die. I used the rest of my DNA to mutate the more lethal symptoms. I stole this picture of the internet – Usability didn’t have all the stomach related illnesses. But this is what it looks like to select traits to mutate.

Some items will mutate on their own without DNA points, but most you unlock. This particular disease is very infectious, quite severe, but not very lethal.

Usability was less infectious and severe, but more lethal in the end.

There’s pretty graphs at the end to show how the disease evolved, the world was infected, and the race for the cure.

So there you have it! The world has been defeated by Usability where Cramps failed! My job in User Experience is assured! 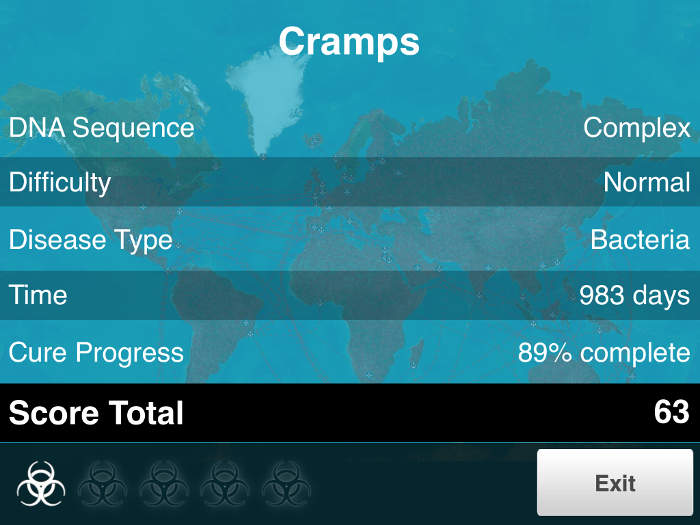 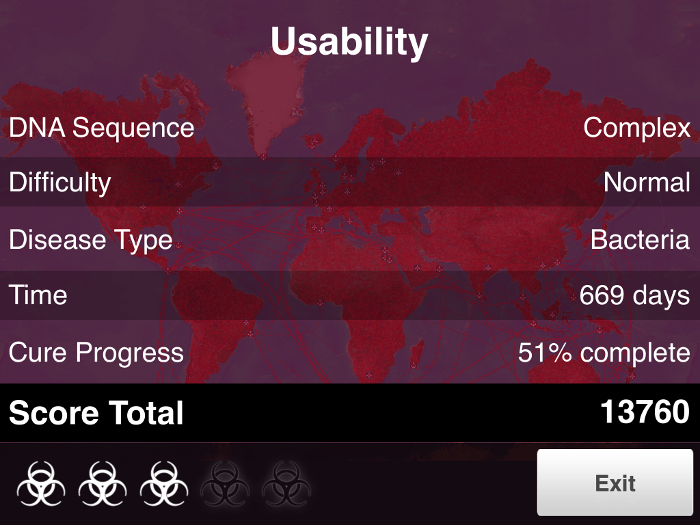