I’ve always tried to keep the Huffman’s humble. This is not easy with a legacy family where I know soon they will be rolling in money. It does not take long to accumulate wealth. Chana’s garden was my first attempt to use up money without expanding the house. 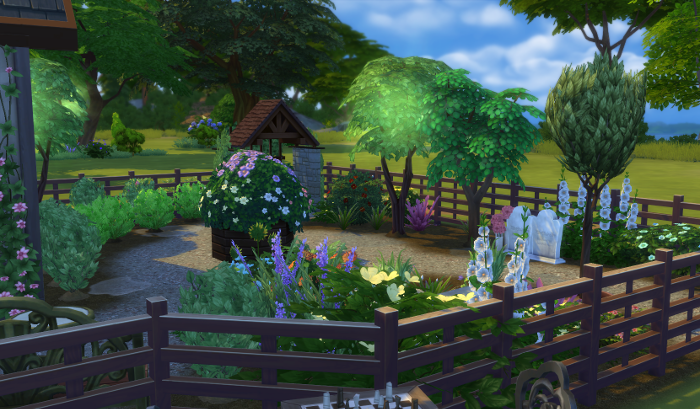 While a good portion of the garden are garden plants – which don’t really cost much – a large number are flowers and bushes to help bulk out the garden so it feels more lush – especially after we’ve just harvested.

Evelyn has the gardening aspiration like her grandmother Chana, so I feel this garden will only grow. During Sam’s generation, my plan was to build up the exterior lands with trees and rocks and other landscaping. A small outdoor sauna seemed like extravagance enough. 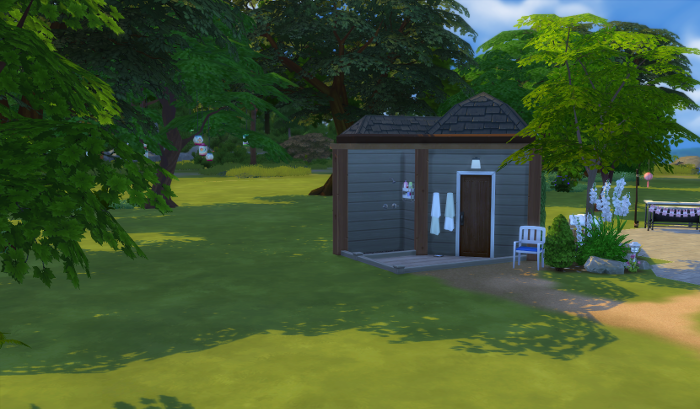 And I used the excess money the Huffmans made this generation to add trees to the giant lot of grass. Snugg it up a bit so it fit with the surrounding island trees.

This all failed when Sam had five children. The small cottage that was working – as long as we had plenty of outdoor space – was not going to fit two more children. Sam and Karen had already given up the master bedroom to fit the twins and Jasmine.

But once Paige and Pippen aged up, I knew I had to give in and remodel the Huffman cottage. I’d already decided a loft was in order for either the kids or the parents. But overall I didn’t want to ruin the overall look of the house.

You can just barely see the lofted bedroom upstairs – but otherwise, the exterior of the house was untouched. Inside was remodeled to have a proper living room. (Still no TV for the Huffmans.)

And finally a dining room that (still) doesn’t fit everyone. Even if I put six chairs at this table, which I tried, I have seven sims. So outdoor dining will still be a thing. These lead into the once again expanded kitchen. (The bathroom has been moved to the other side of the house.) 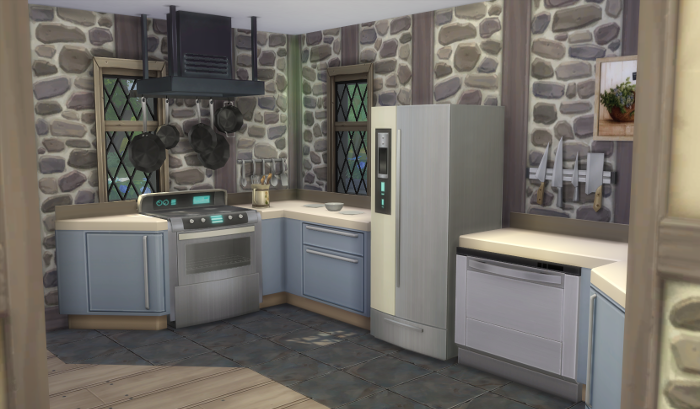 And from here, stairs lead up to the loft. Where Sam and Karen have plenty of space again.

And we can finally see Sam’s collection of pictures.

The lighting up here is off because of the roofs. And most unfortunately, the loft could not overlook the living space below, this still annoys me. but every time I tried to replace a wall with half walls or a fence, the roof cut into the room. Sigh.

Back downstairs, the living areas leads to two rooms.

The left most leads to the new but still-tiny bathroom.

And the other leads to the kids domain where I learned that having only 2ooo simoleons for this remodel may have been pushing it. I did not sell any trees, but we were down to 25 by the end. So there’s a lot of work that needs to be done here. The area which used to be both the master and kids’ bedrooms has been divided into a play and study area and Pippin’s bedroom.

It’s a little Harry Potter under-the-stairs-y, but  I hope to have money to redecorate it soon. On the plus side, he has a window?

The majority of the rebuild money actually went to giving in and giving this place a basement. 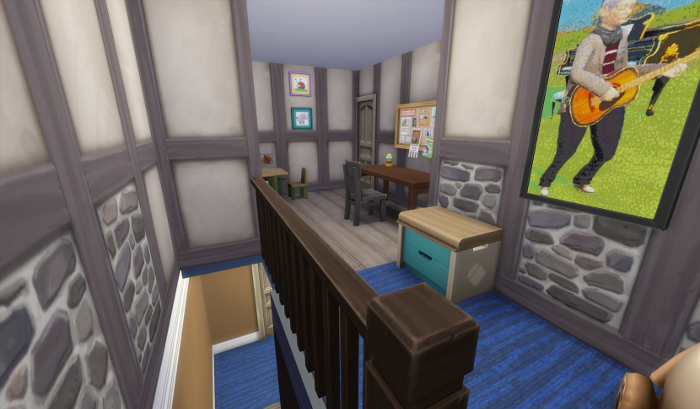 I really resisted adding a third floor, but there was just no way for the girls to fit without it being awkward and giving up on all “living” space in the house.

Here’s where my lack of money really is apparent. I plan to put a couch in that corner as soon as I know I can pay the 4k bills. (Yes I foolishly remodeled on a Sunday).

Look forward to seeing their rooms properly done over the next few posts. I don’t want to leave them this empty longer than I have to. There is one further surprise in the basement. Besides having wall space for more of Izzy’s paintings of our previous generation and Sam’s epic photography.

The room under the stairs? It’s a second bathroom! I know, amazing? It only took seven sims for me to cave.

And that is the Huffman’s gen two house. I don’t anticipate further remodeling this generation. There is still plenty of outdoor living space for them to expand into if they need more room for hobbies. Hope you enjoyed the tour!

CC Credits: There’s not a ton of cc in the house, but there’s a little bit here and there. Mostly my favorite pieces. Perhaps you’re interesting in downloading something you see?