This is the second chapter of my drifter challenge House 004. You can learn all about it the challenge here and read or watch lots of folks trying it out. If you missed part one: read it here.

Dear diary,
I feel like I did back in middle school when I realized I had a crush on Roger. We still hang out from time to time, but not like before. He’s got his own family now and I? I have Kayson. Kayson Lee. I’m blushing just thinking about him. He’s younger than I am, so for the longest time I figured he was out of my league. That, like with Roger, I would crush from afar and nothing would come of it. I don’t even recall when I first saw him, wandering around the neighborhood perhaps? He was just a teenager when I moved in so I didn’t think. Then he started coming around more often, I invited him in when it was obvious how curious he was about my carving. I showed him what I was making and he was transfixed. It was adorable. I told him he could come by anytime. No, nothing creepy. I don’t know what he thought of me, but I didn’t even think of him that way. Until he showed up as a young adult on my door. My heart leapt into my throat when I saw him. But I’m not good at keeping my feelings to myself.

Finally, I confessed. And … unlike Roger he’s totally into me. I know I’m not much to look at, my silhouette is practically non-existent, but that doesn’t matter to Kayson. He likes me just the way I am. And so now I wonder, could there be more here? Dare I replace my childhood daydreams of Roger, marrying Roger, kids with Roger, with Kayson? Roger has moved on, should I?

Dear diary,
So much happens. When it rains, it pours, right? I made this super awesome tool for work. Betsy, I call her. She was just another pretty toy for weeks, until I isolated a particular reflective crystal from what looked like ordinary Jet. Betsy can transform objects. Turn them into something completely different. There’s a conversion of mass and energy and other rules so objects don’t turn into just anything. A chair usually turns into another chair a lamp into a lamp. 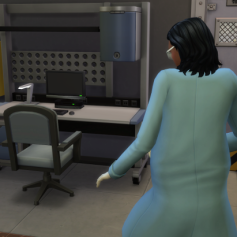 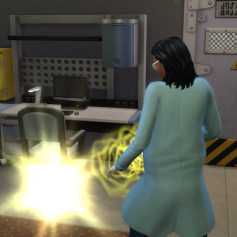 It is an excellent way to make a few extra simoleons. And simoleons were much needed. Kayson has moved in with me and it didn’t seem to be right to be still living outdoors. True there was a roof over the bed, but really? So I finally used up my savings and built us a house. The double mattress just fits. And I bought the cheapest fridge I could find. So it’s like a proper house. There’s even a window!

I also have finally bought my very own rocket. It’ll take time to build it to the specs I want. So I’m still years away from my own space visits, but it gives me something to do on the weekends when I’m not at work. That and Kayson. He’s amazing. And twice as handsome as Roger was. I know we’re not ready to tie the knot or have kids or anything. But honestly? I couldn’t be happier.

Dear diary,
Good news and bad. I’m pregnant. That’s the good news. I’ve always wanted kids, always imagined continuing this Drifter line. Did you know there have been four generations of Drifters that I can trace my heritage back to?

Shannon Drifter, our founder – so to speak. I don’t know much about their life, But nothing was built up back then. It was just fields and fields of emptiness. Mama said Shannon gardened a bit. The house is still over in Oasis Springs. It’s so cool, open to the desert during the night. There’s even a pool! 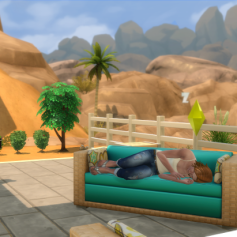 Casey and Emery were Shannon’s kids. Grandma Casey was a real outdoorsy person. Spent all the time out in Granite Falls and then married Grandpa Dennison who took care of Mama while Casey worked. Tech guru of some kind I think. I must get my science bent from there. Mama sure didn’t have it. I visited their house a couple times when I was little. Pretty little place, even more outdoors-focused than Shannon’s with a real zen garden in the back.

I never knew my great Aunt well, she had two kids. Douglas and Tanisha. Mama said Douglas was even more of a Drifter than she was. He didn’t settle down anywhere until he was older. Tanisha’s daughter Caitlyn has visited me a couple time. She’s a lot younger than me. Are we cousins? Or second cousins?

Mama, of course, was the best Drifter. Her little cabin on the lake is perhaps the calmest spot in all of Oasis Springs. And of course Millie, Billie, Tille, and Willie are there. Mama’s still around, she visits often and was as excited as I am about the baby. Papa was a lot older than she was unfortunately, but he got a chance to see me after I moved out – even if he’ll never get to meet my child. 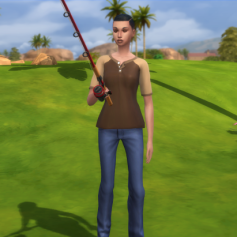 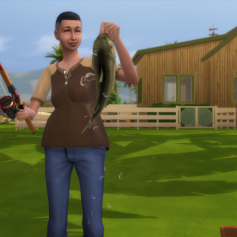 The bad news? Oh yeah. I told Kayson about being pregnant as soon as I knew. I guess we never talked much about kids. I just assumed he wanted them as much as I did. But I’m afraid that’s not the case. Mama says to give him time to be used to the idea.

Dear diary,
Being pregnant sucks. Okay it’s not really that bad, at least not compared the horror stories everyone tells me when I start to complain about my own lot in life. Everyone, it seems, had it worse. Morning sickness that lasted forever, being the size of two balloons, swollen feet, sweating in the summer heat. I guess I have it easy. I got sick once or twice early on, but overall I’ve been able to work normally.

I have to find someone else to test any serum’s I make – company policy. And my coworkers are not usually enthusiastic about drinking my serums. My poor serum performance has apparently become a work joke. What really sucks is I can’t go jogging anymore. I miss that. So instead I spend my freetime working on the Blue Pearl. I think I’m almost done with it. It sits in the back yard taunting me. It looks ready for the stars now, but there’s still plenty more I want to do – upgrade the rockets, tweak her maneuverability, so it’s not like the ban on space affects me much. But whoever decided pregnant women can’t go to space…well, boo to them.

Kayson’s come around as Mama said he would. While he’s not enthusiastic about the idea of kids, he’s been helping plan the new house. We can’t keep living in this tiny little hovel much longer. Especially not once there are three of us. And that will happen any day now.

Dear diary,
Did I say three of us? Hahaha. Try four! Twins! Can you believe it? I think it’s just perfect since I always wanted more kids, but Kayson, while he was fine with the idea this time, is definitely not family oriented. Robin and Rowan. Aren’t they adorable? Robin’s our little tiger and pretty fussy. Rowan’s just the sweetest thing. And Kayson has been a great help with them. Taking care of them while I’m at work. I think he secretly loves them as much as I do, but is just too afraid to say so and go back on his earlier ‘no kids’ stance. I mean, he’s there the moment they start to cry.

The new house is perfect. I love it! We went for two stories. I’m not sure if we want to put the twins upstairs or keep them downstairs. Both options are valid. For now, the upstairs is empty. We spent ALL the money on the rebuild. We have a proper kitchen now – with a cabinet AND stove – not just a grill. And a couch with a TV and radio to kick back after the babies are asleep. Plus we finally FINALLY bought a proper bed. You can only sleep on an air mattress for so long and those last few months being pregnant just about did me in. I hated even seeing it – mocking me with its false promises of comfort. There’s still so much more to do on the outside. The yard is pretty plain with just the woodworking table and the chess table. There is no garden, I don’t have Mama’s easy landscaping option. So we’ll have to actually pay for it when the time comes.