This was the first house I ever built in Sims4. (No cc from the start).

The layout was inspired by a townhouse style hotel that I stayed with my sister for a friend’s wedding back in late October of 2014. At the time I built only the first two floors. One of my FAVORITE expansions from Sims3 was Into the Future. Not for the gameplay, I’ve still only been to the future twice, but for the stuff! I loved the sleek lines and how the items in the pack brought the outside inside (astroturf!). When we got all that wonderfully space alien stuff in Get to Work, I had to add it all in. Plus green has always been my favorite color.

In March, I returned to the house for my Sidelines: Get to Work story. Translating a real place to sim builds, of course, is always a challenge. I tend to play loose and fast with “reality” – going more for “inspired by”. So I didn’t stick too close to the graph paper layout I’d made. And of course, the decorations were anything but inspired by that boring hotel apartment.

The main focus of the house is the living room. It opens to the backyard and is divided by a wall from the kitchen-dining. I used the green “carpet” the most in this room, and just sprinkled it around elsewhere. I’m not sure I ‘like’ the TV above the fireplace, but I was staying faithful to my layout.

The kitchen proved difficult as I hadn’t much experience (and still don’t) building at an angle. But I had just learned about turning off the auto-cabinets and the wonder that is cabinet options.

This was my first attempt at merging cabinets to move from a straight line to a diagonal. And has been a handy trick to have in my back pocket for future builds.

I could not figure out how to make the dining area work according to my layout. So I gave up. Later on, I added the stairs to the basement just behind the dining table.

My sister and I stayed in the downstairs room (You can just see the red door from the hallway). It had a huge jacuzzi, I fell immediately in love. It feels like the height of decadence to have a hot bath IN your bedroom. Nebula’s color was red, if you couldn’t guess. So I used the green sparingly in this room. 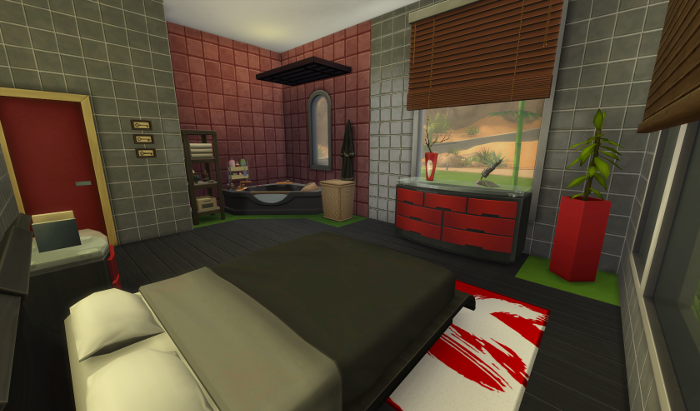 Let’s head upstairs. In the original layout, it was just a loft with several single beds. That doesn’t really work for a proper house. So I turned it into an open place to put the computers and other activities. Unlike a hotel room where beds are the main focus, this was a house, and there needs to be things to do besides sleep.

I also added the second bedroom. This became Cocoa’s room.

The second story balcony overlooks the deck below and I snuck a bar up there. This is where Nova met her future paramour. Or rather, we invited a mixologist to our Halloween party and they really hit it off. I promise I will continue Nova’s story someday. The stairs to the roof are just around the corner.

The huge in-game telescope got to go on the roof. It kind of became a patio for star gazing and I got to pull in more of that almost real grass. It more than makes up for my lack of roof-building skills, right? 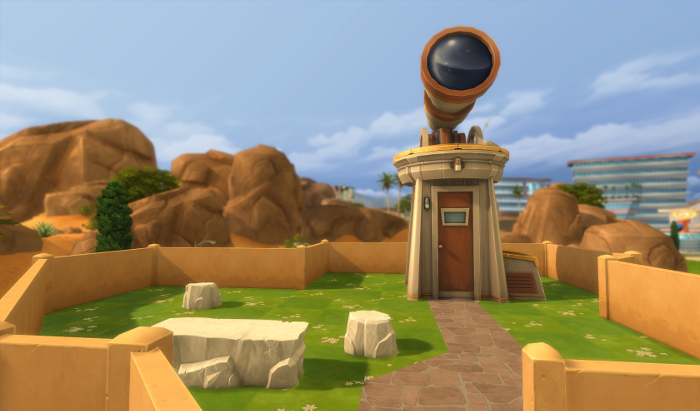 In the backyard, I added a pool because, why not? I’ve never lived in a house with a pool, but at the time there was really only gardens, grills, and pools for the backyard. That, and the stupidly big playground equipment, which really doesn’t belong in a house backyard.

I have to say I loved how the tree turned out in the backyard. I’d just started experimenting with merging items together and it was fun to try a bunch of different things until it felt just right. 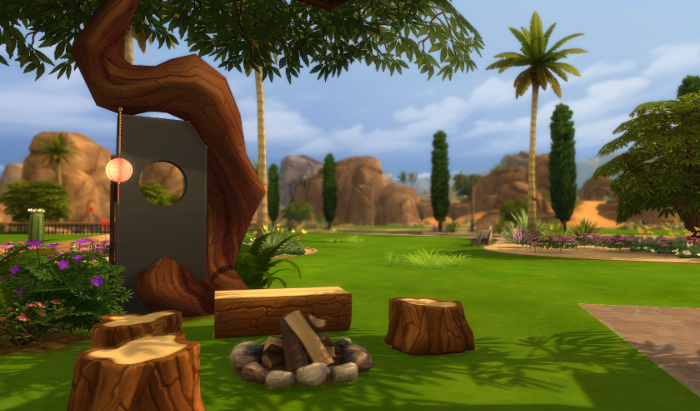 I added the basement to have a bedroom for Nova and added a proper den. The upstairs living room was popular but gets crowded fast so the more places for the sims to congregate the better.

I like how adding the “fake” outside lets the basement feel less dark and closed off. I also added the sticker trees and clouds. There’s no need to pretend this is a “real” environment. This took a lot of moo and fiddley placement so that the plants didn’t poke out of the windows and truely destroy the illusion.

In my game version of the house, I ended up building on two additions. A room for Penelope off the basement den when she aged up to child.

I put windows on the other side of the windows and then added the shades. Otherwise, her bedroom would view directly onto the den which is a bit too open. And I added a sub-basement corridor. I love putting rockets in basements (see Taylor’s house or my Pigglewiggle Mansion). The version on the gallery does not have these items.

Even though this was my first build, I still really really like how it turned out. It actually also works in the Oasis Springs setting, which I”ll admit, not all my builds look like they belong where I put them – especially in the desert. I’m a bit too Northern Midwestern and all trees and rivers, not rocks and shrubs.

This house is on the gallery under ra3rei. I reuploaded it today since I had misspelled Futuristic. Oops.