The hills are alive, with the sound of music!

Okay perhaps the fields are alive, with the sound of me singing rather badly. But really, have you ever seen a more beautiful day? Really? I bet you haven’t. How would any other day even begin to compare? I’ve got a lovely new kitchen. So for the first time today we’re not eating oatmeal. 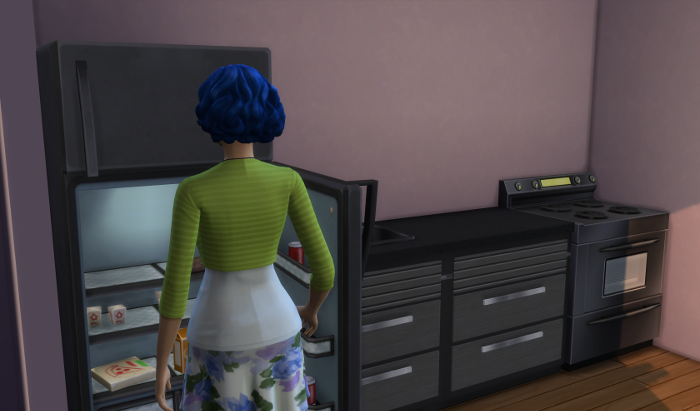 My garden is growing like mad. Perhaps I don’t make a much from my plants as Aubrey does from her paintings, but I think there’s value there and surely it will only grow more valuable as time passes. That’s what Aubrey has always said at least. That over time the garden produce can be sold for so much more.

And I got to meet some new friends today! We finally have neighbors and aren’t stuck alone in a field of grass. It’s like we’re a real house now. With neighbors! Um…Okay. I’ll admit it. I can’t even remember her name, but she was super nice and lives just up the road from us. We chatted for a bit after I’d weeded the garden and was looking around for some fossils or crystals to sell while Aubrey was painting. Yes, it’s not much – but every little bit helps, right? And it gets me out of the house to go exploring and meeting folks. Like Javon. 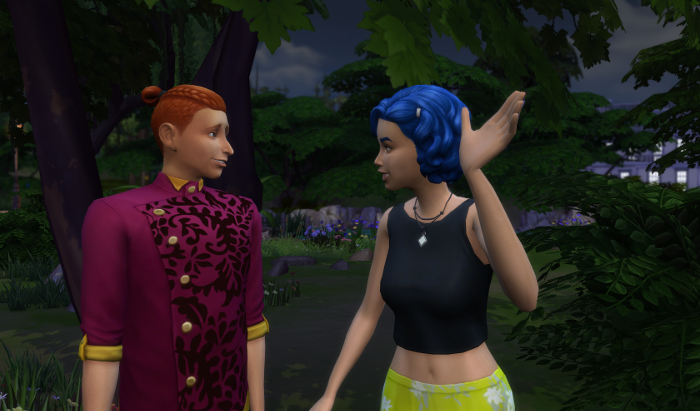 I feel a little bad for sneaking away in the middle of the night. But only a little. I knew she wouldn’t mind and would probably prefer us to do our dating out of the tiny house we shared where you could hear a mouse sneeze. I made sure to make an extra special breakfast the next morning to make up for it. 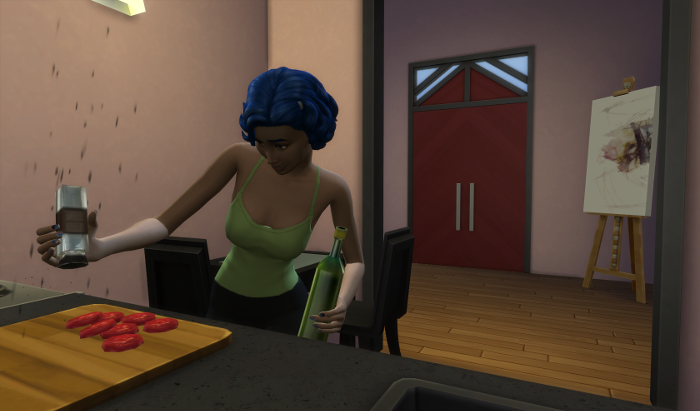 Javon invited me out tonight as well. To the spring festival in San Myshuno. It has a bit of a reputation I hear, but I pretty excited to go. Aubrey of course is invited as well. 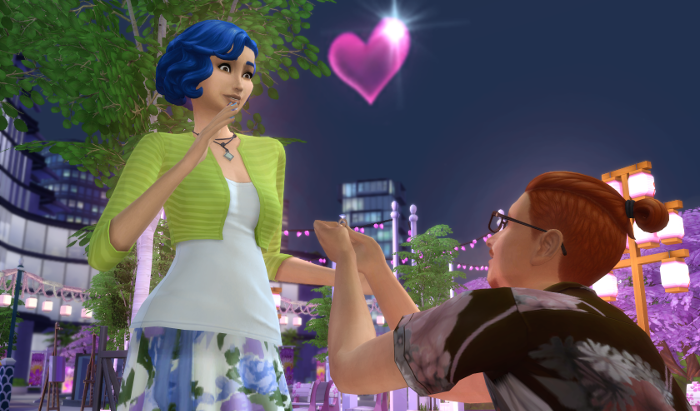 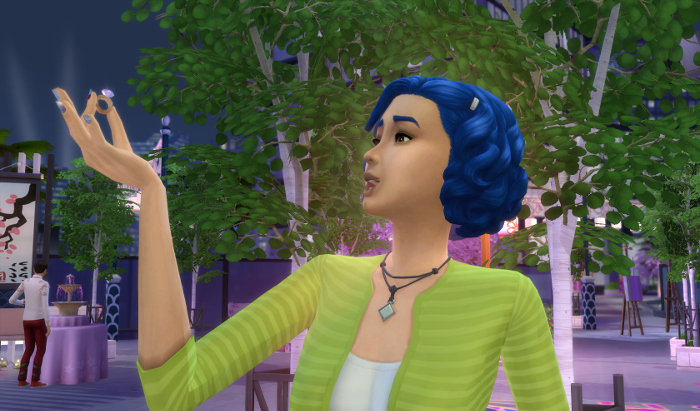 It’s a proper house. Finally four walls, a door, a roof. Everything you might need to call it a house.

Of course it’s no where near big enough. I’ve got to sell a lot more paintings before it can be called a proper home. 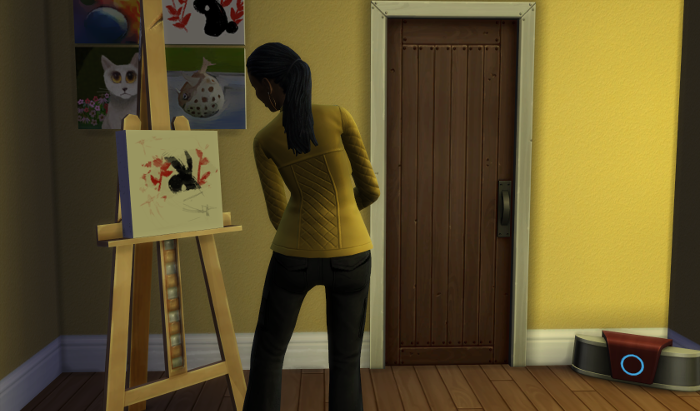 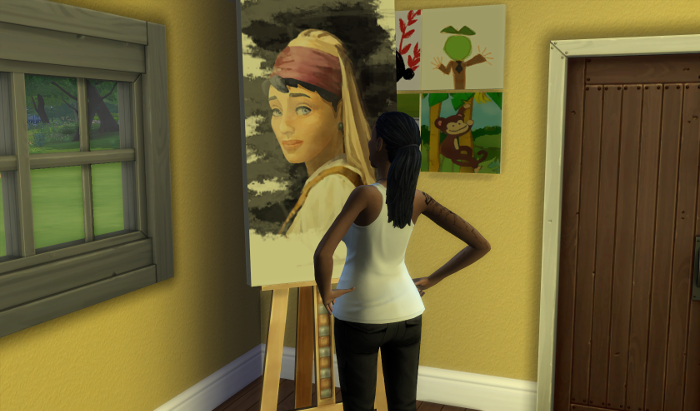 I’ve been so absorbed with painting, that I didn’t notice when Lorna went missing for half the day. Usually after she’s done collecting she drops by and chats with me – forces me to take a break and get some fresh air. But it wasn’t until nightfall that I saw her blue head and realized she hadn’t been around. She wanted to know if her boyfriend could move in.

Boyfriend? I admit I’m pretty clueless when it comes to relationships, but I had no idea she even had a boyfriend. I probably shouldn’t have asked. He’s a doctor apparently, and wonderful in every way and a great kisser to boot. Gah. Please plug my ears, no more. I really, really don’t want to know about Lorna’s sex life. He came by though and seemed pretty nice.

And it was beyond obvious that Lorna was over the moon about him. Which is what really matters I guess. He invited Lorna and by extension me to the Spring festival in San Myshuno. The romance festival. I had no intention of stepping foot there, but Lorna can be pretty insistent. And now she had Javon to encourage her. It was…okay I guess. My dad was there which was really cool. I hadn’t had a chance to see much of him in all the flurry of house building. 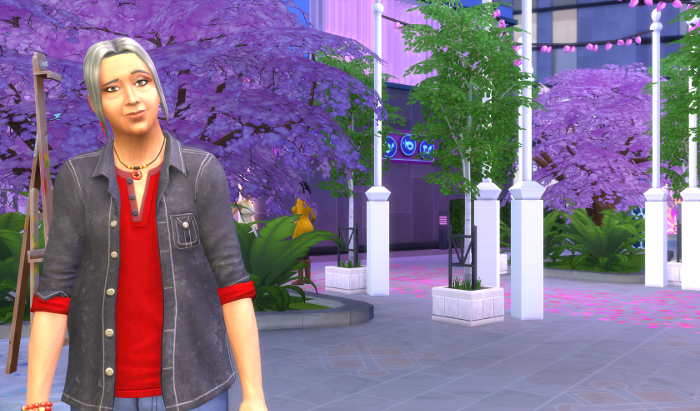 He said he understood and got this wistful smile on his face. Remembering, I’m sure, his own hectic first days. So that was good. And Javon proposed to Lorna. Which was also good for them. I guess they’ve been dating longer than I was aware of if it was that serious.

But honestly? Romance is not really my thing. Everyone was just all over the play kissing and worse. Honestly, if Dad hadn’t been there, I would have left the moment I arrived. Left it to Lorna and Javon and everyone else who enjoys that kind of thing.

I was more than happy to call it an early night and head back home. To our beautiful, beautiful, home. Not bad for a few painting sales, is it?

Author’s Note: Oh my, what a house they are building together! I’m kind of basing the picture on large estates (since I know I need lots of columns down the line. And I found one where the main door was above the ground. So that’s my current inspiration. I hope to get a gazebo or some type of outbuilding. Javon has joined our household which is a huge bonus as he’s a level 7 doctor. Since we can play all the house members this challenge, I occasionally follow him to work. I’d love him to get a promotion, but even so his 2k salary is going very nice.