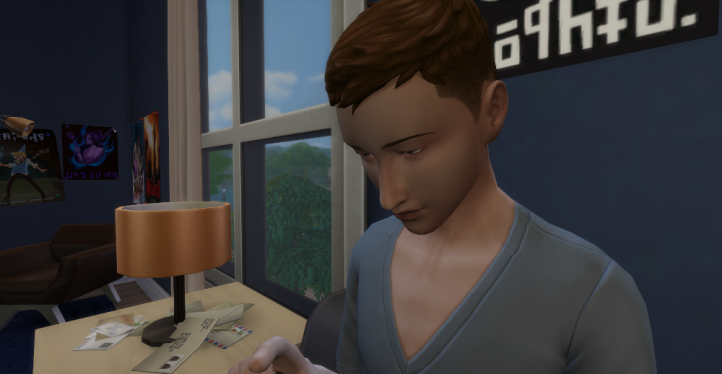 Sunlight hit Max’s face and he could hear the leaves blowing past the open window. His mind was foggy, lost in half-remembered pleasure. Fall was the worst…best time of year. It didn’t take much to be drawn back. A hint of cinnamon, the skitter of leaves on the ground. Had it been a dream? Had she been a dream? He could almost feel her warm hand on his shoulder, hear her breath in his ear. 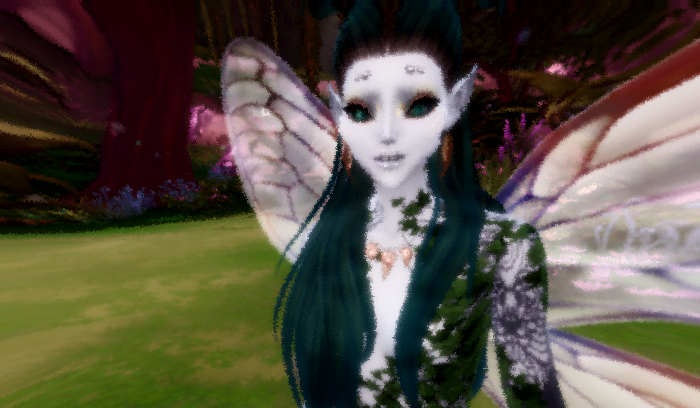 “Max,” her voice was a song itself and promised…promised so much more. He felt stuffed and ready to burst, his skin itched.

The phone buzzed on the table and Max jerked, driven out of his half dream. He grabbed at the phone before it could fall onto the floor and checked the display. Fuck. “M-Mom?” He tried to collect his thoughts. Return to the here and now.

“Max, honey. Can you pick up your brother?” She sounded tired and that further drove him back to earth. He took a deep breath. Now?

“Uh, I have the party tonight.” She knew that right? He’d put it on the calendar weeks ago after they’d agreed to let him go to Steve’s Halloween party.

“I know. But the daycare called and someone needs to pick him up now. Your party’s not until 5, right?” He checked the time. It was almost 3pm. Dan wasn’t due home for another hour and a half. “What happened?”

“I’m not sure, but it sounds like he had a tantrum or something. I’m with Bre right now at the doctor’s office so I can’t go. Grandma already said that she can watch Dan, but someone needs to pick him up.”

“Uh, sure. I can do that.” Max said. His mind buzzing again, but for entirely different reasons. Mum was at the doctor’s office? Was it serious? “Is…is everything all right?” “Oh yes,” Julia’s quick answer did little to quell Max’s growing fear, but he pushed it away. Or tried to. “Thanks so much honey and have fun at your party.” She paused a second before continuing. “And remember, you can call if you want to come home early.”

“I know.” Max flushed at the reminder. What did they think was going to happen tonight? Goodbyes said, Max got dressed and headed out to pick up his brother.

The daycare was on the corner of Elm and Pine street, not far from his old middle school as he rounded the corner he saw the problem. 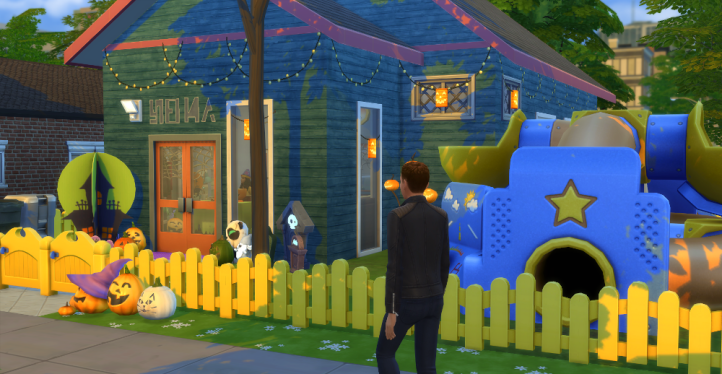 The front of the daycare had been decorated for Halloween. Cheerful pumpkins sat smiled in the windows and grinning ghosts decorated the yard. It was all very festive and cartoon and not in the least bit scary. At least not to most children.

One of the teachers was waiting in the front room where he heard familiar sniffling. Dan must have thrown a royal tantrum for the cries lacked his usual energy. She smiled as she recognized him. “Good to see you, Max.” she nodded toward the bed by the window. Dan had wedged himself into the far side of the cot again the wall. He was doing that sniffly sob of someone who had cried for so long he’d forgotten how to stop on his own.

“Damian, your brother’s here,” she said softly catching the toddler’s attention with a light touch. She was probably afraid of setting him off again.

Dan hiccuped twice as he looked up, tears streaked his face. “…M…Max?” he hiccuped back another sob and Max could see the relief in his eyes. Yes, it was all going to be okay now. If only. He collected Max from the cot and the boy buried his face. Within moments his shoulder
was soaked with tears and toddler snot. He rubbed his brother’s back trying to soothe him. Crying that much often made him sick and it was past time for him to stop.

“What happened?” he asked.

“We were getting ready for the Halloween party when he suddenly screamed and punched another kid.” “He punched a kid?” Max blinked. That was not what he expected to hear.

She nodded. “They both started crying, ah – don’t worry, the girl is fine. But Damian wouldn’t calm down so they brought him here and we called your mom.”

“She called me to pick him up.” He shifted Dan’s weight a little higher. “She was at the doctor’s office.” Fear coiled up in his gut and Max pushed it away. Breathe.

“Is everything all right at home?” the nurse asked. “I mean, this isn’t like Damian, he’s usually a sweet kid.”

“Everything’s fine,” he lied. Or maybe it was the truth? “I think it was probably the Halloween decorations. Dan is terrified of g-h-o-s-t-s.” Max spelled out the forbidden word. “How long does he need to be out for?” Max wasn’t sure what their policy for toddler on toddler violence was.

“Out? Oh, we’ll have him apologize to Amelia tomorrow and as long as it doesn’t happen again, it will be fine.”

“Ah, good.” Max’s ministrations had worked on the exhausted toddler. The boy was dead weight in his arms. Poor kid. Now that the scary ghosts were gone, he’d fallen asleep. It was time to leave.

“Uh…will the decorations be up tomorrow?”

“All week,” she confirmed with a smile. “Then we’ll get ready for Thanksgiving.” “They look, um, nice,” Max said. He’d have to tell Mom to keep Dan out all week. Maybe Grandma and Grandpa could babysit the rest of the week? Dan was still sleeping when they arrived at the assisted living place where his grandparents had moved several years ago. Max hated it. It had a funny smell. A mixture of medicine, lemon cleaner, and some unidentified funk. He hated more what the place meant. Death.

But he’d been here before and no one stopped him as he walked down the halls. Bland halls. Bland rooms. He hoped he never would have to live in such a place, he’d rather die early. His grandparent’s door, though, was easy enough to spot. In an institutional sea, it was a spot of personality. He knocked and waited. Within moments, Grandma opened the door. She was smiling and wearing an apron covered in flour. The scent of pumpkin spice drove out all other scents. “Perfect timing.”

Max gave her an awkward hug, still holding the sleeping boy and trying to avoid the bulk of the flour. “He fell asleep on the way over,” Max explained heading to the couch where he deposited his burden. “It was all a little too much for him.” Max spied the cookies cooling on the bar. That explained the smell, they were fresh. His mouth watered. Something in the kitchen went “ping.” The oven? And his grandma hurried over to it.

“Help yourself,” she waved at the cooling rack before she bent to take out the next tray. Yes! Max tucked himself onto the stool and took three. He grinned. There was nothing better than grandma’s cookies. He watched as she added the fresh cookies to the pile, their centers still soft and drooping.

“Are they ready?” Grandpa’s deep voice sounded from the door. Max turned and frowned. Something about how the light hit his grandfather’s. He looked old. He looked ill. Hank took a step closer and Max blinked. His grandpa looked normal again. “Awake are you?” Grandma grinned. She play-hit his hand with the spatula as he reached for a cookie. “You’ll spoil supper.”

“But,” Hank protested turning to where Max sat, cookie in hand chewing guiltily. Max swallowed. He held the third cookie in his hand. Should he put it back? “He’s a growing boy. Plus he’s not staying for dinner.”

His grandfather harrumphed.  “Ready for our trip?” Hank asked.

Mouth full of pumpkin spice he nodded instead. They’d been planning a fishing trip all summer, but due to one thing and another, they’d never managed to finalize it. But next weekend they were all headed to Granite Falls and that meant grandpa-grandson fishing time. His grandpa grinned and snuck a cookie off the plate in front of him. Max looked, his grandma had her back to them as she filled the tray with little mounds of cookies.

“What brings you here?” Hank asked.

“Dan had a rough day,” he nodded toward the sleeping toddler as his grandfather stuffed the cookie in his mouth. “They’d decorated the place for Halloween and he got scared.”

“They decorated the daycare?” His grandma turned. She narrowed her eyes at her husband who was trying not to chew. “Not scary or anything like that, but there were ghosts and Dan is pretty scared of them.”

“I don’t blame him. That house of yours is haunted.” She said this matter a factly. Like it was normal for the house to be haunted. She didn’t sound scared or anything. Max wondered if she knew about James.

“It’s how I met your grandpa. When I learned he was fixing up the ‘haunted’ house, I made every excuse to go see it. I had shivers the first time I visited.” She confided with a smile.

“It was a chilly day,” his grandpa put in after he finished swallowing the stolen cookie. “Ha, it was more than that. Remember how the piping used to clank? And the stairs moaned?”

“And that stopped, didn’t it, when I replaced it all?” Grandpa shrugged. “Don’t mind your grandma, she’s always wanted the house to have ghosts. I’m surprised she stayed with me after she failed to find any.”

Max was torn between wanting to tell his grandma there really was a ghost and his name was James, and laughter. He was saved from either by a soft whimper from the couch. They all turned and saw Dan peaking around the couch, his eyes wide. Had he heard them talking? Grandma rushed forward and picked up the boy who was starting to look like he was about to cry again. “Want a pumpkin cookie?” She asked distracting him.

Dan nodded and was given a cookie which he stuffed happily into his mouth. Ghost talk forgotten. Max hoped. He checked the time and slid off the stool.

“I’ve gotta go,” he apologized to his grandparents. It was getting late and he still had to get dressed for the party. His grandparents nodded, but he had to say goodbye to Dan personally to avoid goodbye tears. He was pretty sure that Grandma’s cookies helped make the farewell be less tearful.