At the end of generation one in the Newcrest Legacy Challenge, you turn the home lot into a park. Since my family is the Flower family, I creatively named it Flower Park.

Half the fun of the park was trying to make it fit in with the area around it. On the left was a little park with some grills and monkey bars. On the right was the giant ship. So I built this park to fit as seamlessly as possible in the middle to make this a whole single park.

There’s something so appealing about building gardens. Hannah Flowers was really into gardening, so I made the focus of this park a small conservatory. That and I haven’t built one since we got glass roofs. And this glass room does some really fun things in the light.

I love placing both outdoor plants and potted plants together. For this challenge, I was supposed to have a certain number of perfect plants. I kind of forgot about that so these are exactly perfect. But the plants in here are mostly grafted plants. So if you place this you’ll end up with a lot of collectibles and it seems that plants grow regardless of the season when they’re inside. 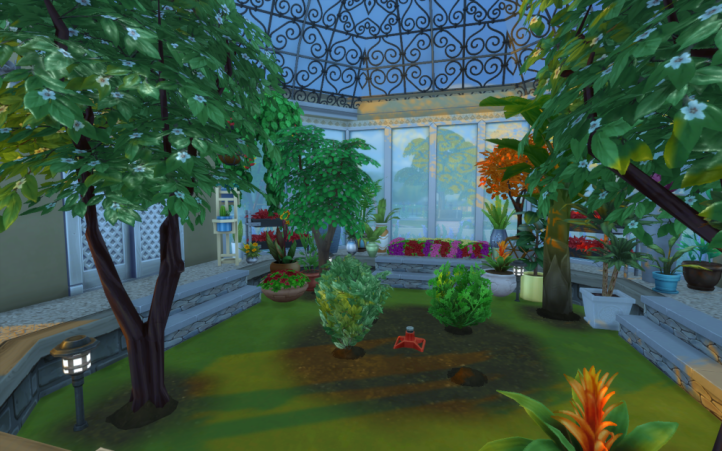 There are toilets and a little sitting area inside the building. But that’s it, there isn’t a lot to the “official” building. The back of the building has more gardening spots. I tried to mix it up so that each season there would be some plants out and some dormant. 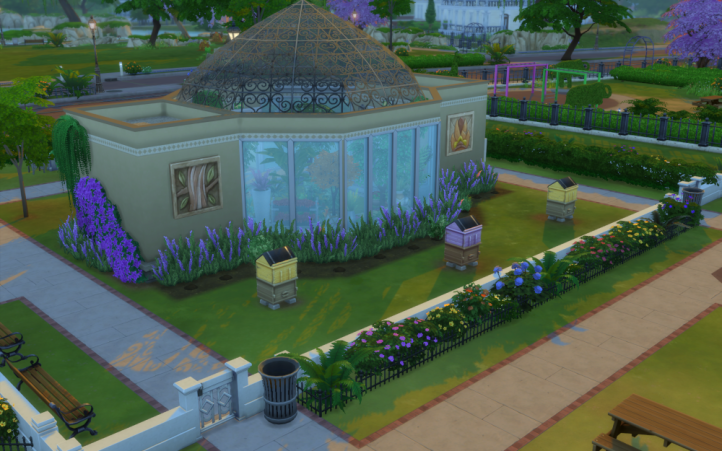 I put most of my attention on the yard and finding ways to get it to merge with the neighborhood. I’ve never done that before. and it was really fun and challenging. The conservatory has a small wall all around it which gave me extra “yard” to work with which made the merging easier.

The same happened with the awesome gate that opens to the park next door. It’s a plain metal trellis and I thought I had seen it somewhere before, but I think it must have been a cc-object someone grabbed. It’s just cruel to tease us with those objects! Since the park to the right had the monkey bars and the left had the jungle gym pirate ship, I thought my park would work well with the new swings. 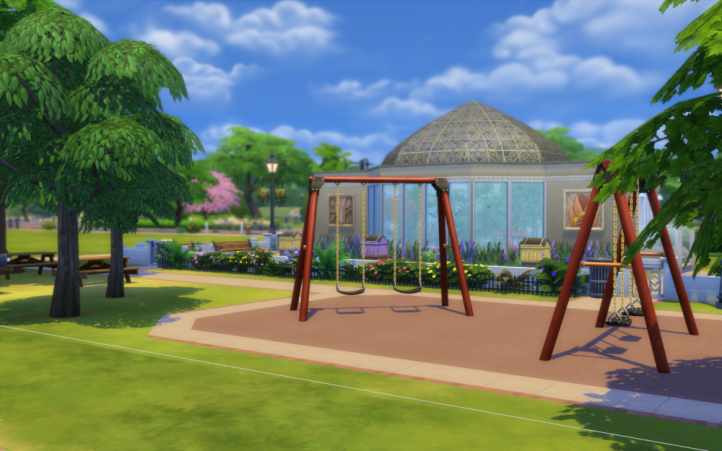 I managed to find the same ground and paths (eventually) as they used in the other play areas and was only limited by the game. They made perfectly round playgrounds and that’s just not possible on a grid. They could also make curved paths.

Actually, it was most frustrating that I couldn’t get my paths to connect up with the main paths. (You can see that above on the left.) There’s one measly square of grass between my path and theirs. If I could world edit – or even world tweak – that would be perfect. If I could, I would have added another path somewhere out the bottom of the swings to meet up with that lower path. But it was way too far away for me to even fake it like I did on the left side.

If you’re looking for a lovely little park in your Newcrest, feel free to download this park. It’s on the gallery under my username there ra3rei under the name Flower Park.