Mobile Games NOT to Play…

…if you want to live a fulling life outside of a video game.

Or maybe it’s just me that gets sucked into games to the exclusion of all else? Most of the time it lasts a few weeks, sometimes worse though. And it goes in waves, suddenly I’ll be playing a game I haven’t played in years again.

My current favorites in no particular order

Color by Number coloring book – more on this app here.

Do not recommend if you have trouble running out of energy – or get annoyed with 50billion ads to pay them money. I’m good at tuning that out. This is a simple matching game where you just have to draw a line connecting as many matching colors as you can. And you’re various insects killing slugs? I think. There’s a plot, kind of. Each level has different win rules. I’m on level 271… (The slugs are wearing Halloween costumes right now).

Each bug has different stats and skills.

You link together similar items.

Uhg, I’ve spent so many hours swapping pieces to make matches in these two games. Even worse is you get to rebuild a house/garden in between the games so there’s incentive to advance. Super addictive – be good at quitting when you’re out of energy or it’ll cost you. These are both by the same developer. Homescapes is newer – and more difficult I believe. I’ve been good at not playing these recently.

Gardenscapes level 1200… yeah I know – I don’t want to even think about calculating the number of hours of playing that is. My only complaint is that it feels like there’s more an more “special” events every day. I feel like there were fewer events when I started.

Part of the garden I’ve cleaned up and decorated.

Your basic matching game…kind of.

Homescapes – only at level 556. Plays almost the same as Gardenscapes (even the same Butler – Austin). But is more difficult. There have been times I’ve been stuck on a level for several days before succeeding. Proper use of boosters is a must. 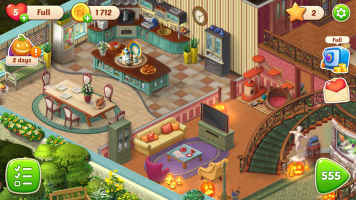 The house as you slowly rebuild it.

Also by the same folks that made Gardenscape and Homescape, but this one of those farmville-esk games (that I’d managed to avoid until this one). You plant crops and turn them into goods and put them on a train/plane/helicopter – whatever to fulfill the orders of those around you. But they did a great job with the townsfolk and you really feel like a part of the town. 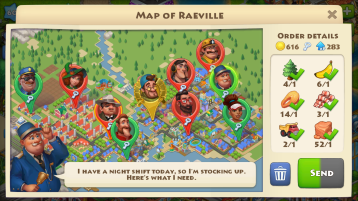 I spend a lot of time trying to make sure my town is perfectly designed.

I blame my dad for this one. This is a simple tetris-esk game that for some reason –  I am terrible at. My high score is 18,485 and normally I die around a score of 5,000…or less. My dad’s high score is over 40,000. You just drag the shapes onto the screen and when they fill up a row it disappears. If you can’t place the shape, you die. I thought I was good at this type of game.

My mom got me into this game and she’s right, if you play it too much you start thinking like the game. In this game, you merge three coins to make a bigger coin, three plants to make a flower, three eggs to make a dragon, three piles of dirty laundry to make clean laundry? I wish.

Game Mode: Merge things until all the grey is gone. 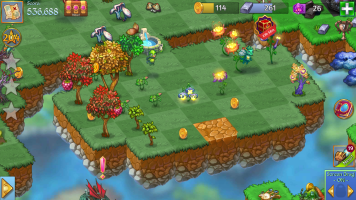 This game has two parts. First the World Map that has the challenge game where you have to clear all the spoiled land to advance. Then there is the Camp where all your dragons live and you can build up the area and clear out the creeping evil. Merging three is great, merging 5 is better.

This is a very relaxing game. It doesn’t really change at all. You direct a Koi to eat various things as it grows up into a dragon. It never gets more difficult – once a fish is level 10 it evolves into a dragon. Gotta collect all the color combinations. 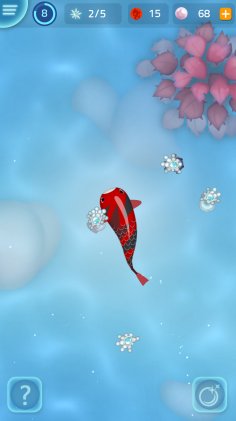 Swimming around and eating things. 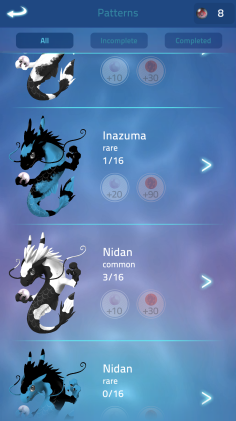