I’m on another building kick. Trying to find appropriate ways to play with the terrain tools. The challenge this time isn’t color, it’s trying to use mainly base game stuff and just hints of other packs to kick it up a notch.

I’ve been trying to play around with hills and how to build a house into a hill. I started this before Strangerville came out, but it fits really well in that world or Oasis Spring. Build One uses Get Famous (I wanted that front door!) and Strangerville. I got to play with a side sloped roof like in a build/rebuild I did to one of SimSupply’s builds. I wanted to make this roof to be all glass too – but I was playing with move objects off – so I couldn’t put in any plants to make the tiny conservatory. Instead, I made it a secret entrance to the basement bunker which I then filled with all the Strangerville stuff. The main floor is pretty simple – an open plan kitchen, dining, living. When you first walk in you’re in the kitchen. Turn right and there’s a mini living room. I kind of wanted a run-down look for this – maybe post-apocalyptic, but that’s a hard look to do without a lot of mods, or using more packs so it’s not really properly disheveled.

The dining is just a table in the middle of the room because I wanted the upcoming reading nook more than anything. After the kitchen, this little understair nook was the first thing I made and it really forced the rest of the layout. It was a challenge without move objects and I realized suddenly we only have one ottoman that isn’t part of a pack. The bookcase door – leads to the basement hideaway. Beyond the secret door is the back door and lab access. It’s pretty sparse.

The final corner of the main room is a little woodworking station. As I said, kind of apocalypse so it made sense to add it. 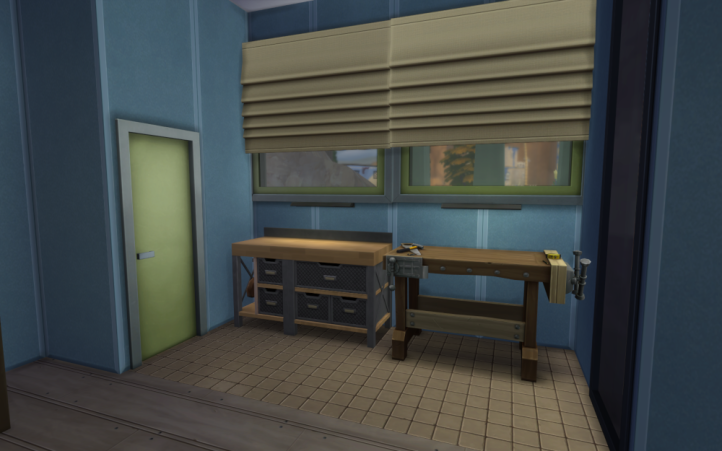 The little door leads to a very nice bathroom – at least its nice appliance-wise.

Upstairs is a large open bedroom with several activities for our sim. There’s the new workout machine, a lava lamp, and the desk for streaming videos.

Outside is a small deck area and access to the telescope.

It’s a good house for the new pack and mostly ready for the Covert Operations career.

This is on the gallery, under my username ra3rei. It costs §64,108 and only uses the two packs – Get Famous and Strangerville. 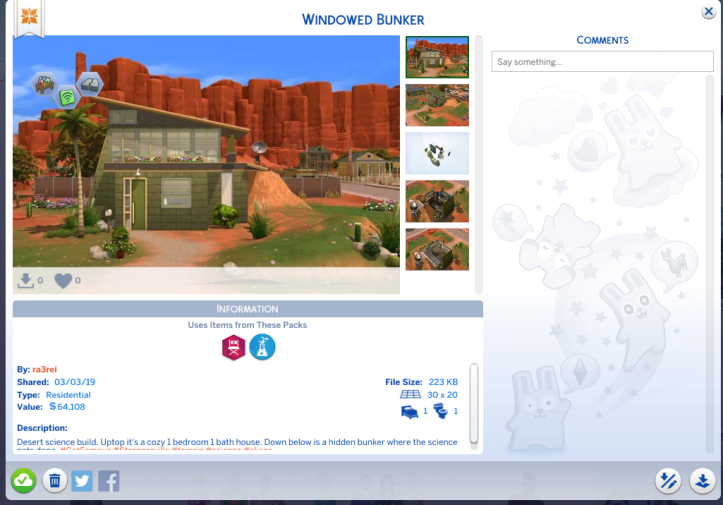