Everyone has sims that they are less fond of come by, especially in a Legacy. In the Huffman family, that has been Karen Flemming. She was named by the game – I’d not even heard of “Karens” before I met her, but she is definitely a Karen Karen.

I’m not sure why I started disliking her, she’s a creative writer and absolutely adores Sam. Always has. I let my sims pick their spouses, it’s usually pretty clear when things are meant to be. But with Karen, I tried to get someone else for Sam. Anyone else.

She was rarely mean to Sam though and in the end, I gave up and let her have Sam. And she did give us five beautiful sims.

Twins Evelyn and Elisa, Jasmine, and our final twins Paige and our gen 3 heir Pippin.

Karen however never seemed to be 100% behind her kids. Her eyes were always for Sam first. It felt like she only had the kids because she knew Sam wanted them. He did have a family aspiration. On the other hand, it also could be that I ignored her. I have so few pictures of her interacting with the kids. I have lots of her with Sam.

So, image my annoyance when she hit her sparkle bar (with us sitting at 10 sims in the house) and hung on for sim weeks. I kept expecting her to go any moment until I realized it wasn’t happening and perhaps, just perhaps we could get her aspiration finished. One more bestseller and one more writing point.

She got the bestseller. She failed the skill point. I did have Sam plead with death – in hopes that one more book would do push up to her aspirations final requirement.

But Death hates all my legacy sims and refused. And then there were 9.

That wasn’t my guilt – this is…

I like Sara – honest. She’s got a great chance at getting run at our artistic points and she was painting up a storm. She also had just made level 6 of her career.

But I got a notification while I was working with Cora on their aspiration, everyone else was at home.  I chose to ignore it. And continued to ignore it for several sim hours while I played Cora.

I told myself if she made it to the end of the hijinks festival, I’d save her. I’m not sure why she didn’t spin into it, and I didn’t choose the outfit she was wearing. You can see it’s different from what she was wearing in the museum. It took sim hours and I thought she’d make it.

She did not. And Death did not care for my plea. He knew I chose this outcome with my inaction.

And then there were 8…and three overly sad sims. Pippin however is not affected as the two were never married and their relationship wasn’t very strong. Unlike Sam and Karen, they weren’t autonomously flirty with each other so without my interference, they drifted apart. Her kids, however, yeah – not happy.

Ah yes, all my sims have grown. Abby was the first.

I wanted something special for her birthday – but I learned that restaurants and birthday parties don’t mix well. I invited Elisa but the group just didn’t work and I couldn’t get them all at a table and ordering food. A party would have worked, but not the food ordering bit which is what I wanted.

Abby ended up aging up without the cake after the sun set and Elisa left before I properly got folks into restaurant mode. I keep wondering if she wants a relationship with her biological daughter. They seem friendly enough, but there isn’t that mother-daughter relationship there. Abby clearly sees Evelyn as her mother.

Next up, the very next day, in fact, Reece and Regan blew out their candles. They aged up rather adorably – as I think the Huffmans have a tendency to do. Totally not biased here. 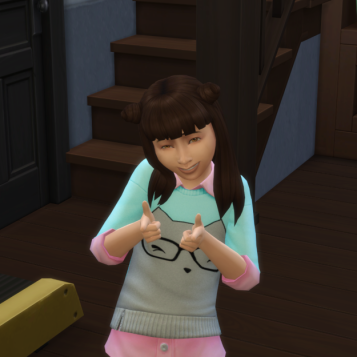 I love all the grandparent interactions that I got to experience because of Sam taking that youth potion. He did a lot of chores around the house having retired back when he first aged up. I do not regret this decision at all even if it made CAS awkward with more than 8 sims in the house.

Sam doesn’t have the long-lived trait, but he is very healthy and managed to get a level 10 fitness as an elder.

I was surprised by Pippin’s birthday. Although I shouldn’t have been. He’s the youngest of Sam’s kids but everyone else is a proper adult now.

Pippin is an influencer these days and while he does have a day job now, most of his time is still spend recording videos in his office.

And then it was time for Cora’s birthday! Our first child of generation 4. Cora successfully achieved the Whiz Kid aspiration. Our first time that’s happened this legacy.

I was really curious how Cora would age up with such an interesting toddler face, but that eased up in childhood. Some folks are great at sim facial recognition – I’m not. Unless it’s really extreme, like the Huffman chin. Cora has the Huffman chin. ❤

And our Huffman nose. This makes me so happy. We still have a week of in-game play before the twins age up giving us a view of the remaining genetics this generation. Crossing our fingers for some strong Huffman genes coming through.

Confused about who’s who? Check out my recent post that moved everyone up to date with the actual timeline. Also, there’s a Plum Family Tree. Or if you want to try reading up till Pip’s childhood…there’s the legacy proper.