Children From the Stars: Chapter 1

A few months ago I moved to San Myshuno. It was time to start a life on my own. It’s quite different here than Oasis Springs. The lights! It’s like the city never really sleeps. But I’ve been finding my own place here and meeting the neighbors.

There are always things to do, places to see, and people to watch. Everyone is living their own lives and pursuing their dreams. It feels like I’m a part of something so much greater than myself. Just one small window facing out into the world.

My move here was the culmination of years of study and training and was paid in full by my new workplace. The San Myshuno Police. SMP – pronounced “stamp” – I have no idea where they think the “t” came from. But you’ve heard their catchy phrase? Stamp out Crime? Yeah, I know.

I’m not entirely sure when I first wanted to be a police officer. Aunt Nova was a detective back when I was little and I remember her coming home in her uniform. I loved that she was helping people every day. Perhaps it started back then? Although back then I wanted to be a scientist like my daddy.

Being an actual police officer is less exciting than my childhood-self imagined. It’s a lot of sitting around and waiting. Staring at computer screens and running search after search after search looking for some kind of connection. And walking. Lots of walking and talking.

Today, Detective Owans and Dr. Masaw briefed us on the current case. Another burglary had been called in. 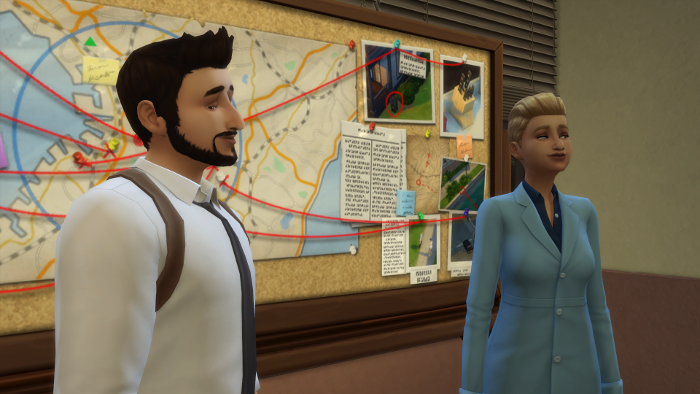 Some of the richer districts in town have been hit by a spate of break-ins. But not much of actual value had been stolen. This time, whoever it was, just left their calling card and a confused homeowner looking for something, anything, that was taken.

Being relatively new, I was sent to patrol the streets as a visible deterrent. No expectation that I would actually find out whoever it was. Kind of a PR type of job. 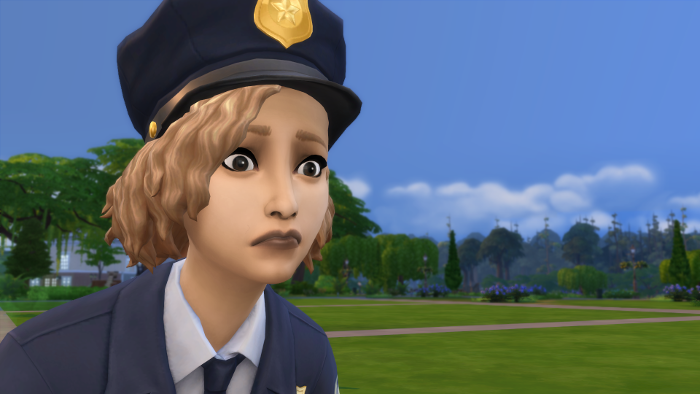 As expected, I only met the neighbors and nothing was out of order. But thsoe I talked to thanked me for helping protect their streets. Makes me feel a little better knowing I made some sort of difference.

I got back to the office and reported in. Then the chief called me into his office. It was pretty nerve wracking. I’ve only been on the force for a couple weeks. Barely enough to learn how the coffee maker worked. I hadn’t make the coffee too weak, had I?

But luckily, I wasn’t in trouble. Instead, the chief told me he had a special assignment for me. It’s still hard to believe. He told me they’d rescued a small child. She’d been found wandering around the park a few days ago. They needed someone who could take care of her while they looked for her parents. And he’d chosen me.

The chief said she was probably two years old, but they didn’t really know much. She didn’t speak any language they could recognize so they couldn’t ask her. They don’t even know her name!

He said I could refuse of course, and I almost did out of reflex. I’ve never raised a kid before! I didn’t even have a younger sibling growing up. But, yeah. I took this job to help people and if there was ever anyone in the need of help, it was this child.

Author’s Note: Um, hi? Yeah, it’s been forever. But I’m moved and semi-unpacked and it finally feels like my life is returning to normal. I’m not forgetting my other stories, Huffmans, Ghost, and Drifters are still in the works. But well, timing is everything and right now it’s Alien Adoption Challenge. This is Pinstar’s newest challenge and I love his challenges. There’s a bunch of us on the forums plotting our stories and their potential interconnectedness. Be warned if you read the thread there WILL be spoilers.

So… you may notice my town is filled with familiar faces. I replaced all the EA default sims with us and our favorite sims. So you’ll see some familiar people in the backgrounds. How appropriate is it that Ninjapig runs the food stalls?! If you want to be added let me know – you might be in here already, if not I’ll pop you in and it’s up to you to make your way into a screenshot.

Simselves in order of appearance: Joie Wilder, Vanilla Penguin, CathyTea, Myself, Ninjapig, and Jes2G.  Did I miss anyone?

Just for fun, here are some pictures I took of Penelope at work before I started the challenge. I just couldn’t fit them in the narrative this time around. 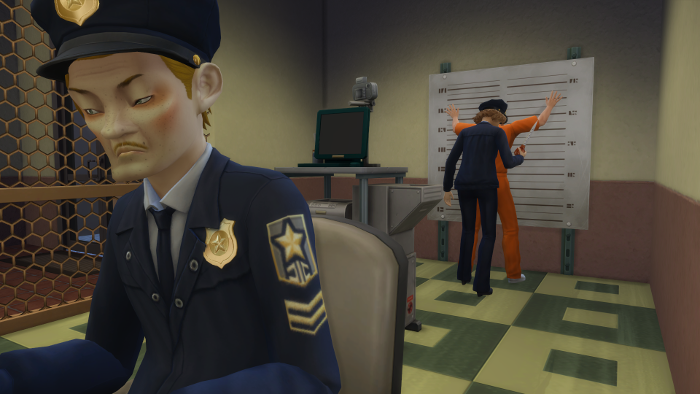 Thanks for sticking with me through my unplanned full-stop hiatus. It’s good to be back.