I hesitated at the door to Julia’s room, she was still awake. But I knew that before I came. I also knew that Bre was already deeply asleep. Julia was sitting up in bed reading a book. For a moment I was content to watch her. These days Julia didn’t smile as much as she used to, but she was clearly enjoying the book she was reading. 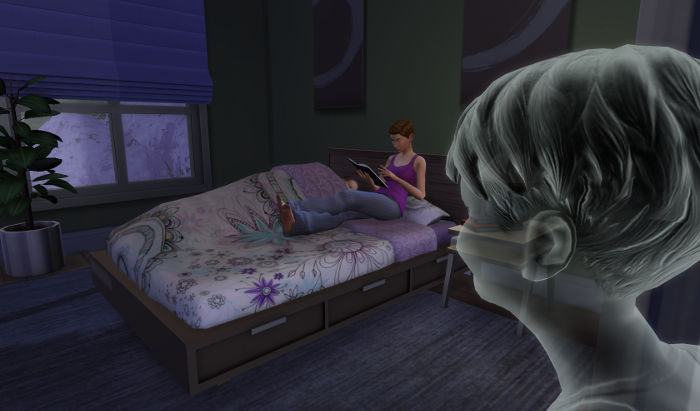 Everything had been messed up since they came back from their vacation. No. Longer. It had gone wrong back when Bre got sick. So it was nice to see Julia enjoying herself for once. I didn’t want to ruin that so I back away from the door.

“Oh, James!” Julia’s soft voice stopped me. Too late. She set down her book and slid quickly and quietly out of the bed. “I was wondered when you’d show up. Max has missed you.”

I bit my lip. It wasn’t like I was avoiding them on purpose. Okay, maybe a little. But…. “I’m sorry,” I said. Although I knew she’d misunderstand. 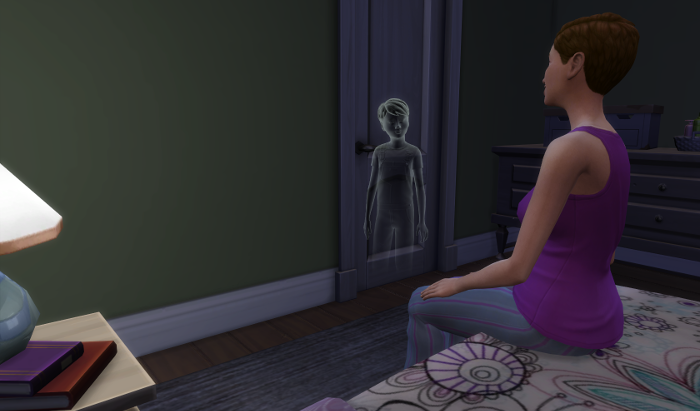 “He knows as well as I that it’s not easy for you to keep track of time.”

“No. I’m sorry about Bre,” I said quickly. I’m not sure what made me say it. I had almost convinced myself I wasn’t going to bring her up.

“Thanks,” Julia said. Her smile was small and tight. “The doctors all say that it’s going well.”

I shook my head. That wasn’t what I meant. Which was worse? Telling her or not? But it was too late now to go back and not say anything. Julia followed me out onto the landing. I sat down on the couch slowly and took a deep breath. I had to do this.

Julia blinked, “How can it be your fault?” 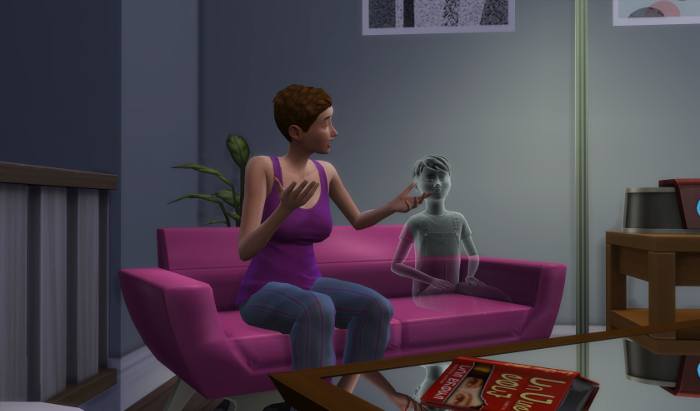 “Back when you first went away, I blamed Bre. And…and I wanted something to happen to her. I’m sorry. It wasn’t right. And now…now she’s sick.”

Julia was smiling, I could hear it in her voice. I frowned. She didn’t believe me. But, I was a ghost. How could either of us have known this was possible? I could do all kind of things normal people couldn’t. And causing someone to get sick and die? I was certain a ghost could do that much.

“You know, this runs in Bre’s family, right? So we knew this was a possibility. That’s one of the reasons we caught it so early. We were looking. Even if you did want something to happen to her back then – this didn’t start back then.”

“But,” my voice was barely a whisper even though we weren’t in any danger of waking up the house. “I – I’m dead, right? So… wouldn’t killing someone be-”

“-No,” Julia interrupted. Her voice was calm though not angry. Although she spoke louder than normal. She shook her head. “I don’t think think so.”

“Two things. First off, the doctors say Bre is doing well. It might not seem like it right now, but they don’t think she’s dying.”

I paused. Could that be true? Bre seemed so tired and sick all the time. And every time she seemed to get better she’d head back to the hospital and come back sick again. How could she be getting better?

“Secondly, you’ve never killed or hurt anyone before. No matter how angry you were. Before us, everyone just got tired of broken pipes and left. I’m pretty sure giving someone cancer isn’t a power you have.”

I didn’t know that. I never really paid attention to the people in my house before. Just enough to know when they weren’t there anymore. Had they all left on their own?”

Julia grinned again, a bit of her carefree self coming through. “I looked it up when I was looking up information on my best friend. I found a lot of newspaper stories about the house and about you, but you’re not connected with any deaths.” 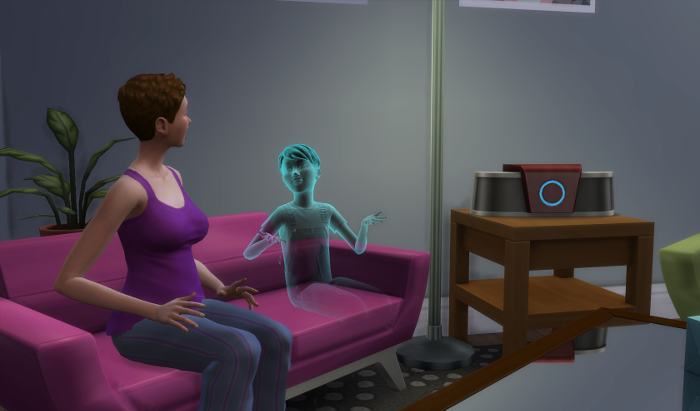 I allowed a tiny bit of hope to sneak through. “So, she’s going to be okay?”

Julia nodded. “I think so.”

Max headed up the stairs and into the school building slowly. Around him, his classmates joked and chatted to each other, but there was a bubble surrounding him. Not a physical bubble for they still crowded and bumped into him as they all squeezed through the funnel of the front doors. But no one called out to him or asked him how his weekend had been. No one asked what he thought of the last VC episode.

He twisted the lock and pulled to open up it, but it held fast. God damn it! He checked the locker number, 257. This was his locker. But he’d already failed once and the bell was going to ring soon. If he didn’t get his locker open in time he wouldn’t have his book for class and the teacher would yell at him. Plus he needed to return the library books that were in there today. Max leaned his head against the metal door and closed his eyes. He took a deep breath. Don’t worry, you just put the code in wrong. One more try and you’ve got it.

The lock snapped open as he entered the code a third time. He slid off his jacket and swooped up the library books with a shaky breath.

Max jumped at the familiar voice so much closer to his ear then he expected. He hadn’t expected Billie to find him before class started. They walked together to their first class.

“So then I’m digging through the rubble behind the temple. You know the pile?”

Max nodded although he hadn’t played the game for several weeks.

“Well, I just KNEW there had to be something there. So when the old man gave me the shovel I immediately ran there and tried it out. And you know what I found? A cave!”

Max and Billie had been friends since kindergarten, when they’d been grouped together for both having birthdays in February. They quickly found out had more in common than that. Recess had been a lot more fun when the two of them teamed up for four square. Now they mostly played video games together, but they still shared some classes.

First period was social studies and Max and Billie slid into their seats before the bell rang. Max was not looking forward to the class, he’d only completed half of his homework last night. And Mr. Pancakes had a habit of calling kids to the front of the class to explain themselves.

When the time came to turn in their homework, Max braced himself. Sure enough, Mr. Pancakes asked to talk with him after class. But instead of a lecture like he expected, Mr. Pancakes just looked at him a moment, his eyes concerned not angry.

“Everything alright, Max?” He asked at last.

Max blinked, thrown by the question when he’d been expecting detention or worse. All his excuses scattered replaced with a growing certainty. He knew about mum. “I’ll turn it in first thing tomorrow,” Max said quickly, looking away.

Max just shook his head. He didn’t want any special treatment. He left his class with a frown. Of course, Mr. Pancakes knew about his mum. They were friends since forever. As Max headed for his next class the realization hit, all his teachers probably knew. He didn’t want that. He didn’t want them to ask about how his mum was doing and if he was okay. He just wanted to be left alone.